Rachel Kaplan, a 16-year-old from Northbrook, Ill., a Chicago suburb, started plotting mysteries almost as soon as she could hold a pencil. Her short stories have won regional awards in Scholastic’s annual art and writing competition. Last week, she became an e-author, published on Scribd and in the iBooks store.

Serena Dinh, an 18-year-old college freshman in Albany, N.Y., started playing violin at age 9. A few months ago, she taught herself a little guitar. But it wasn’t until this month that she wrote her first complete, original song.

Both teens followed their passions at the library, during Teen Tech Week 2014.

The Young Adult Library Services Association, or YALSA, an Educator Innovator partner, started Teen Tech Week in 2007 to encourage teens to look to their local library as a resource for cutting-edge digital media and other technologies, and for guidance in using these tools and technologies responsibly.

This year, Teen Tech Week took on a DIY theme, and libraries across the country offered high- and low-tech avenues for teens to create their own projects. At the Northbrook Public Library, where Kaplan is a Teen Advisory Council member, interest was so high the event turned into Teen Tech Month.

“We took every program we do monthly and put in a tech component,” said Summer Kosuge, a YALSA member and young adult librarian at Northbrook. 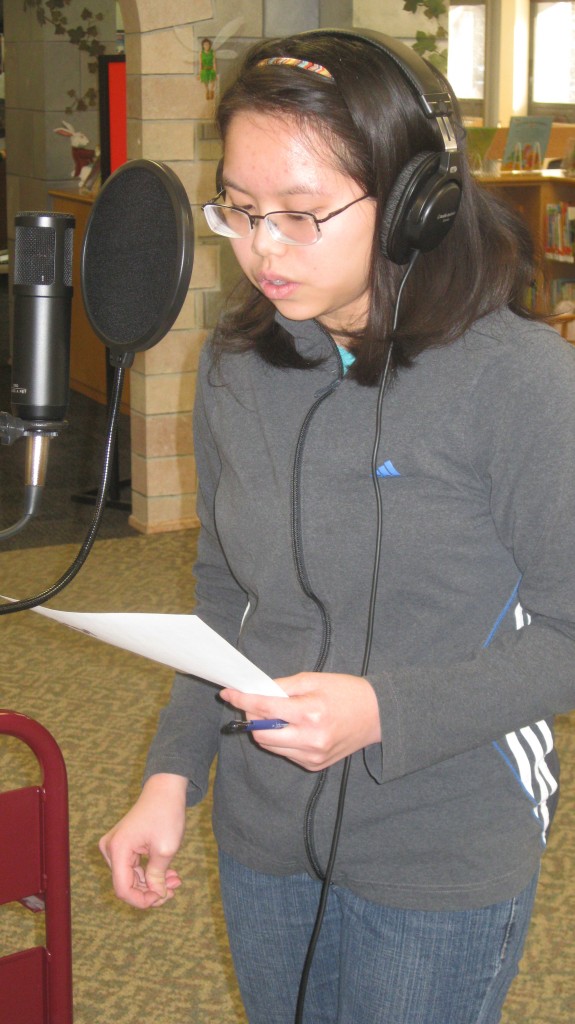 Northbrook had already developed an e-publishing program, known as Born Digital, in which young people in middle and high school convert original stories into e-books, which are then hosted in the library catalog. For Teen Tech Week, Kaplan and a younger teen worked with Kosuge and colleague Amy Holcomb to convert their documents into EPUB files and upload them to Scribd and iBooks.

In the process, Kaplan learned a marketing lesson: While she helped her companion create a digital cover for her book, Kaplan left her own books as just text, with no cover. “That’s probably not the best idea,” she said with a laugh.

E-publishing also offers lessons in digital citizenship and copyright law. “It made them aware of copyright issues,” noted Kosuge.

“Now if someone has something they want to record, we have that capability,” said Loney, who is also a singer-songwriter. “With pro tools, we can release a radio-ready song.”

For Teen Tech Week, Loney encouraged teens to try out the new studio through Build-A-Song Week. Each day, teens layered in different instruments and aspects of the song creation process, starting with drum loops and bass lines, then adding guitar, keyboard, vocals, and finally mixing and mastering final products. (Watch and listen here).

Although Dinh wrote a song on her own, she also took part in Build-A-Song’s collaborative process. Loney’s own bass died the week before, so he improvised by plugging in an acoustic guitar and electronically modulating the sound an octave lower. He played sample riffs and asked the teens what they liked—faster, slower, fewer or more notes—to create a bass line.

At one point, Dinh got inspired and  sang a challenging bass riff that Loney had to learn how to play.

“It was so remarkable that she’s not a bass player, but she started a bass line that turned out to be great for the song,” he said.

That experience was repeated again and again as teens tried out unfamiliar instruments and improvised duets.

“We saw them learning how to listen. It was just really fun to see that spirit of discovery,” said Loney.

Dinh—who’s been less involved with her public library since becoming a computer science student at Siena College—stumbled into Teen Tech Week with the help of her mom.

“My mom just discovered the program on Monday and I decided it would be nice to attend,” she said. “For a while now I’ve been slowly piecing together music of my own, but it’s hard with all the college stuff I have to do. I’d like to do more music-based projects when I have more time.”

For Kaplan, Teen Tech Week activities were a natural outgrowth of her love affair with Northbrook’s library, which began two summers ago.

“I was so done with summer camp. I hated it. I needed something else to do,” she recalled.

After volunteering 20 hours a week, she joined the teen advisory board and stayed connected through the school year. Last summer, she increased her hours, helping out with everything from Born Digital to finding and adapting folktales for pop-up puppet shows.

“By the end of the summer they were saying I lived in the basement of the library, I was there so much,” said Kaplan.

Although Kaplan participates in her school’s literary magazines and plans to take a creative writing elective next year, the library offers a wider window into the world of authorship.

“We can give her a place to put it, publish it, and get recognized and known,” said Kosuge.

Asked what she would tell a bored teen in a position like hers two years ago, Kaplan said, “I’d tell them to go to the library. It’s worth crossing the age gap and learning about all the new things there.”

Educators looking for a way to encourage the kind of dreaming in their young people...