MediaBreaker/Studios, a free tool to teach students how to critically dissect election advertising and media, can be used in conjunction with opportunities and resources from Letters to the Next President 2.0 to, as our partner The Lamp says, “Break the Election.”

Just because students are too young to cast a vote doesn’t mean they’re too young to have a voice in an election. The LAMP’s Break the Election programming (designed for the 2016 presidential election, but useful any time) is an opportunity for educators to help youth understand how media impact elections, and to demand transparency from elected officials. In Break the Election, students remix and critique actual political commercials, news coverage and more to pull back the curtains on misinformation, bias or persuasive techniques sometimes used to sway public opinion and win votes. Break the Election is not about partisanship. It’s about helping young people find their voices, practice critical media literacy skills and become active, engaged citizens.

This guide will introduce you to the world of political advertising, and show you how to Break the Election with your students using The LAMP’s free MediaBreaker/Studios platform and technology. If you’re new to the tool, we suggest you visit our Quick Start Guide for Teachers.

A Brief History of Political Advertising

The run-up to a presidential election in the United States gets longer and longer every four years, and the amount of political advertisements bombarding us has greatly increased, as well. With an estimated $4.4 billion to be spent on advertising in the 2016 election year, there doesn’t seem to be any stopping the tide of political ads. Political advertising, however, is not new in American politics, though the form and language of campaign ads have changed quite a bit over time. 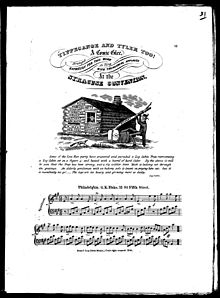 Sheet music for “Tippecanoe and Tyler Too”

In the 1800s, before television and radio, and long before the Internet, newspapers were the dominant mass medium of the day, though even the largest newspapers had a very limited reach. Presidential candidates had to rely on more imaginative means to communicate their message across the vast continental United States. Campaign songs, with words set to popular melodies, were an effective way to cement a candidate’s name and story within the popular culture. These songs were distributed across the country in songbooks, and campaigns would organize glee clubs to introduce the songs to audiences. “Tippecanoe and Tyler Too” is perhaps the most famous campaign song from this era. Much like their historical predecessors, modern political campaigns make use of established popular music to communicate certain ideas and emotions to their audience, like Bill Clinton’s use of Fleetwood Mac’s “Don’t Stop (Thinking About Tomorrow)” or Mitt Romney’s use of Kid Rock’s “Born Free.” 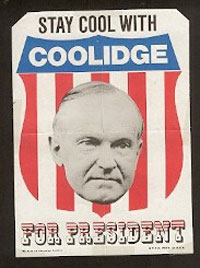 Sloganeering has also been a mainstay of political campaigns through history. While distilling the complexities of a candidate and their message within a 30-second TV spot is difficult, creating a one-line slogan that communicates the promises of a candidate’s campaign, or the dangers of an opponent’s, is even more difficult. Abraham Lincoln offered the American public a sensible “Don’t trade horses in midstream” slogan for his re-election campaign of 1864, while Calvin Coolidge tried to connect with the youth of 1924 with his “Stay Cool with Coolidge” campaign slogan. One of the more infamous campaign slogans was Herbert Hoover’s “A chicken in every pot and a car in every garage” promise of economic prosperity in 1928, which proved unfortunate as Hoover led the country into the Great Depression. Hoover’s opponents subsequently used the slogan against him to show how out of touch Hoover was with the suffering of everyday Americans.

Television’s mass appeal and advertising-focused economy drastically changed the way politicians reached their audiences. Presidential candidate Dwight D. Eisenhower was the first politician to really take advantage of this medium, creating the first campaign commercials, a series of 40 twenty-second ads in which ‘Ike’ answered questions from people about issues, like inflation and the Korean war, in a simple, direct manner. The ‘Eisenhower Answers America’ TV campaign significantly contributed to Eisenhower winning the 1952 election. After Eisenhower, Richard Nixon and John F. Kennedy utilized the power of television to communicate to mass audiences. Kennedy proved a man who was born to be on camera, graceful and confident, while Nixon often appeared fidgety and troubled. Their 1960 debates, watched live by 70 million Americans, established the television industry as the ultimate American kingmaker. When those debates were televised, people thought the photogenic Kennedy was the clear winner, while those listening on the radio thought Nixon delivered the stronger message.

Campaign ads, like all media, are products of the time periods in which they were made, and are often inspired by domestic and world events. Campaign ads focus on the events and issues that concern the voting public, but they do so in limited, casual, and fragmentary ways. The ultimate purpose of political ads is to persuade voters to ‘trust’ a specific candidate or ‘doubt’ their opponent. Lyndon Johnson’s campaign ran a controversial ad during the 1964 presidential election called “Daisy” that showed a young girl plucking petals from a flower, with a voice-over counting down to a nuclear explosion, then a freeze frame and zoom-in on the young girl’s eye juxtaposed with images of mushroom-cloud explosions:

Though the ad only aired once, being pulled after heavy criticism, it became a media talking point and tainted Johnson’s opponent, Barry Goldwater, in the media and in the minds of the voters, despite Goldwater only being implicated in the ad, never mentioned. “Daisy” was created by a Madison Avenue advertising agency and it made use of the persuasive techniques of anti-war PSAs to associate nuclear war and the loss of innocent life with a presidential candidate’s opponent. The ad was pure propaganda, but it worked, and in the decades that followed, up to the present day, most political ads have gone on the attack. Political ads are often most persuasive when they’re communicating fear and distrust of a candidate’s opponent rather than the virtues of the candidate.

There is an entire advertising industry today built just to plan and promote candidates through the media. Campaign ad professionals even have their own awards show – The Pollies. Political advertisements are designed to elicit emotional reactions, inspiring support for a candidate or raising doubts about an opponent. Emotional appeal is the primary persuasion technique used in political advertising, including appeals to patriotism, fear, family, love, hate, loyalty, guilt, and humor. Political ads can be positive, emotionally provocative, and inspiring. But political ads far too often feature the worst kinds of misinformation, character assassination, and fear mongering. As more money is pumped into political media, and the source of that money becomes less clear, it’s important for consumers to question the media messages constructed by candidates and their supporters and to demand less negative ads and more transparency.

All media messages, including political ads, are made or constructed by people. One of the most important media literacy skills is deconstruction – closely examining and taking apart media messages to understand how they work. Deconstructing a media message can help us understand who created the message, and who is intended to receive it. It can reveal how the media maker put together the message using words, images, sounds, design, and other elements. It can expose the point of view of media makers, their values, and their biases. It can also uncover hidden meanings – intended or unintended.

Make Your Own Break: Find Your Material

Now that you understand a bit more about the elements that make up political advertising, you can use what you learned to deconstruct, or “break” the ads themselves. It starts with deciding what ads to break. Because this is about teaching civic engagement and not about promoting a specific candidate or ideology, we highly suggest you source media representing a spectrum of opinions and political parties. Candidates’ own websites and YouTube channels are a great place to start, and you can check YouTube channels for local and national news networks to find coverage to critique.

Some of our other favorite places to look for material and ideas include Politifact.com, PoliticalAdArchive.org, FactCheck.org. We also suggest you check out our playlist of broken political ads made by students so far.

Next, Choose a Prompt

We suggest choosing an open-ended question or prompt for your students to explore with the material you’ve selected. If you’re using MediaBreaker/Studios, this might be what you would enter in your Break the Election Learning Experience.

Some ideas for prompts include:

As students remix, they’ll be negotiating a range of ideas and perspectives about their country, community and leadership. We hope the process helps them better understand the ways that media messages can shape what we know (and what we think we know) about the world around us, and gives them a chance to express and support their own opinions and perspectives.

Once everyone is done remixing, screen the final videos for the group and discuss. Let students talk about their projects and the choices they made, what they learned, enjoyed or didn’t enjoy about the process.

Need more help? Want to share your broken election videos with us? We’d love to hear from you.

To measure the impact of its media literacy programs and tools, our partner, The Lamp...

In a personal post, author Zenzele Johnson shares how The Learning About Multimedia Project (LAMP)...

Our partner, The Lamp shows the hidden side of media with films that critique it.

For this year's Break the Super Bowl advertisement remixing event, The Lamp focused on the...