Facing History and Ourselves

In the onslaught of news about the 2016 presidential election, it’s easy to feel powerless amid so much disagreement over the complex problems facing a country of 318 million people.

Multiply that feeling by about a million if you’re a young person witnessing the first election you’re old enough to understand.

But Mary Hendra, associate program director for Facing History and Ourselves in Los Angeles, says that for educators, the election is an opportunity to remind young people that change doesn’t happen only in a voting booth. It can happen in one’s neighborhood or school, or when young people become what Hendra calls “upstanders”—those who speak on behalf of others and stand up to injustices small or large.

“The candidates are putting forward their vision for the country,” Hendra said. “But it’s a really nice time for students to think: ‘What’s my vision for my own community? How I can take steps now to start making this society the kind I want to live in?’ ”

Educator Innovator partner Facing History and Ourselves is an educational nonprofit whose mission is to help teachers use history to combat racism, anti-Semitism, and bigotry. Its headquarters are in Massachusetts, though it has 10 offices around the country that partner with local schools. Upstanders can be found throughout history and the concept is central to Facing History’s work and mission.

The notion of upstanders is woven through much of Facing History’s work and curriculum. And last August Hendra and Facing History hosted four webinars at Connected Learning TV to help teachers inspire upstanders in their own classrooms. Though the webinars varied in topics, they had a shared goal of helping students understand how their own decisions and actions can make a difference in the world around them.

In one of the webinars, Annie Brown, a middle and high school teacher in Los Angeles, talked about how her students responded to a Facing History curriculum called the Holocaust and Human Behavior. The lessons brought to light the small, everyday choices German citizens made long before World War II, including staying silent when they saw injustices committed against their Jewish neighbors, coworkers, and friends. In a school with a high population of undocumented students, she said, class members were able to make connections between German anti-Semitism in the 1930s and the hurtful words they hear spoken about their own communities, like “alien” or “illegal.”

“When a touchy word comes out, are you the person who says something about it? Or do you just let it slide, because it’s easier?” Brown said. “Students can connect to this, and make choices in their own lives.” 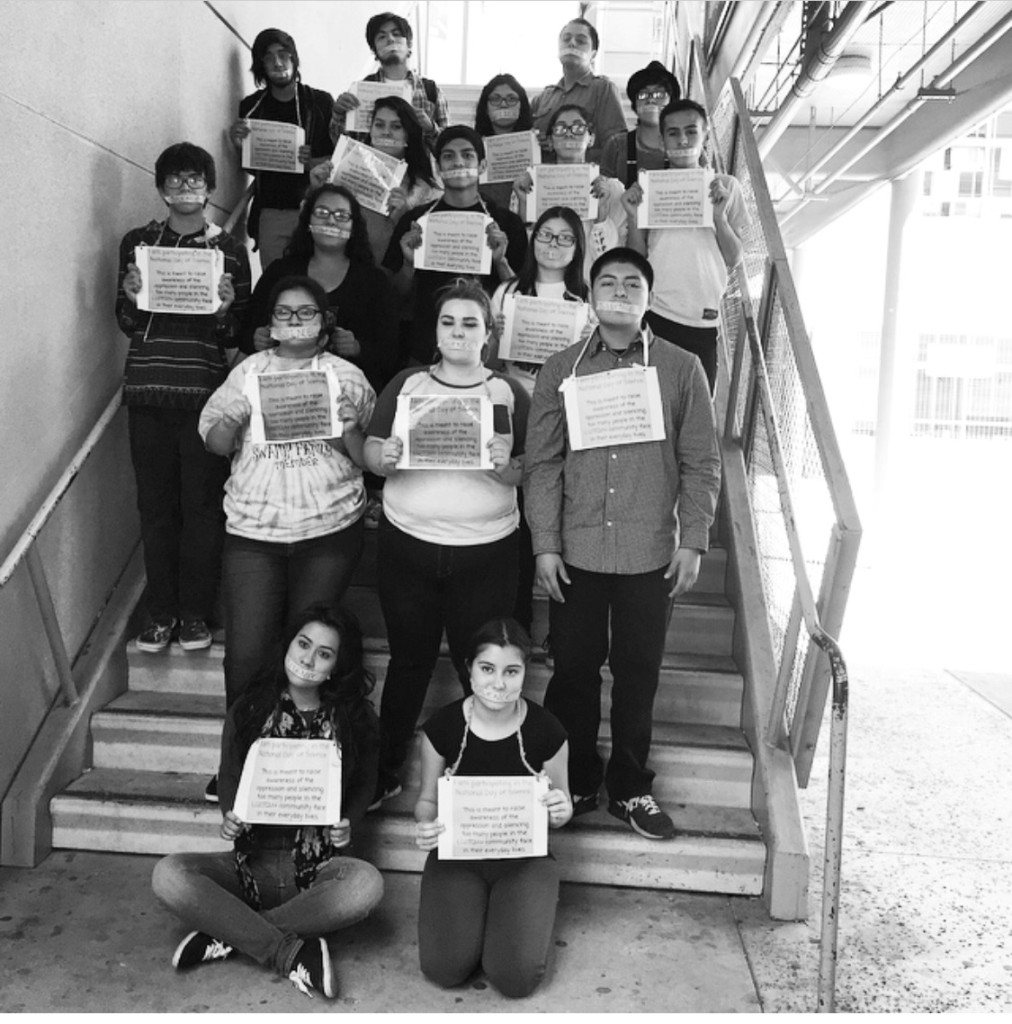 Members of the LGBTQIA+ Club at the Humanitas Academy of Art and Technology in Los Angeles won an Upstander award for organizing a day of silence to protest homophobia.

Another webinar focused on teaching the novel “To Kill a Mockingbird” as a way to understand the intersection of race, class, and gender today. Steven Becton, associate program director for urban education at Facing History and Ourselves, has worked with educators for many years in Memphis, Tennessee. He stressed the importance of bringing students safely in and out of conversations about race in the classroom, which can be complex and sensitive, and said To Kill a Mockingbird is a great tool because it brings with it some identity and historical distance, and its narration is the voice of a child.

“What I love about this book is that even though it’s safe, it doesn’t mean it’s not courageous,” he said. “It’s complex, and it deals with the hard parts in talking about race, but in a way that people can safely come to the table.”

The webinars helped teachers think about how to foster tolerance and be agents of change—something many students in Los Angeles are already doing. Last spring, Facing History and Ourselves wanted to recognize such students and started an annual Upstanders Award in Los Angeles. The nine winning students and student groups included a team that planted a community garden and a young woman who organized a student walkout against police brutality.

But Rosemary Tecun, a 10th grader at Social Justice Humanitas Academy in Los Angeles, was nominated for aiding others in a manner so obvious it is usually overlooked. Tecun started helping struggling students in her classes keep track of their assignments.

“She started really looking out for students who were struggling academically,” Hendra said, adding that Tecun would go along with fellow classmates to visit teachers for extra help and follow up about certain projects. Hendra said that was exactly the kind of upstanding the Facing History curriculum is working to cultivate in students—to see themselves as members of a community who are responsible for each other in a myriad of ways.

Building that kind of empathy in young citizens, Hendra hopes, will have a great impact on society in the future. “These weren’t her friends, they were just other people in her class. She’s a 10th grader—you can just imagine where she will go, and how much wider she will think in the future.”

Top Photo/ Graduating seniors at the Academy of Medical Arts at Carson High School in Los Angeles organize a school-wide event to mentor and support underclassmen.

How To Assess the Strength of a Democracy

Examining historical case studies with resources from our partner Facing History and Ourselves helps students...

“Breaking the Ice” Resources—Building a Foundation for Student Engagement

Just in time for the beginning of the school year, this collection of resources provides...

Can One Teacher Change Your Life?

This post originally appeared on Facing Today, a blog of the international educational non-profit and...