Earlier this month, first-graders at the Park Day School in Oakland, California, showed off the models they built in response to the challenge, “Design something that will carry something somewhere.”

One student designed a tooth fairy with a carrying device, complete with a whole backstory.

“Another child designed a wonderfully elaborate device to deliver a marshmallow to his mouth,” said Ilya Pratt, director of the Design-Make-Engage Program at the Park Day School, in a recent Educator Innovator webinar.

Although almost any educator would agree these experiences are valuable, carving out space and time for them inside a traditional classroom is no easy feat. Experts say both teachers and students need to develop what they call a “maker mindset,” which Make Magazine’s Dale Dougherty defines as “what can you do with what you know?”

“It is an invitation to take ideas and turn them into various kinds of reality,” he wrote. “It is the process of iterating over a project to improve it. It is a chance to participate in communities of makers of all ages by sharing your work and expertise. Making can be a compelling social experience, built around relationships.”

But educators, like students, need practice in developing this mindset in order to support iterative learning in their classrooms.

It’s part of the reason why Jessica Parker, associate professor and department chair at Sonoma State University, has partnered with Maker Media and the Sonoma County Office of Education to create the Maker Certificate Program, a project of The Startup Classroom, available to educators in northern California. (Parker said they didn’t want to just limit the program to educators—it’s also open to junior and senior high school students.)

Parker said the group kicked off the program last fall to “connect the dots” between Bay Area educators and organizations interested in making—and to create a way for teachers to get support and recognition for maker education.

“The Maker Certificate Program is about making and developing a maker educator mindset,” Parker said. “A learner can’t develop this mindset if they don’t engage in making—the pure joy and excitement and complete and utter frustration and failure of it.”

That’s why some courses in the program include hands-on making activities like paper circuitry and working with LED lights. The program began last fall with the first two courses, “Making for Educators” and the online course “Introduction to Making.” A total of five courses are open for enrollment this spring. Educators can mix and match a series of mini-courses designed to suit their interests. So far, 37 teachers plus the four maker educators who serve as instructors have participated. When teachers complete the program, their certificate recognizes the 50 hours of professional development along with five continuing education credits (CEUs).

“One of the goals of the program is that once educators earn their Maker Educator certificate, they will want to then be an instructor in the program and even create new mini-courses and other professional development opportunities,” Parker said.

Traditional classroom settings, Parker said, too often value the product over process, whereas the maker movement is the opposite. With making, the process tends to be more important than the final product—if there even is one. With maker projects, things often don’t go right the first time. And we know there is lots of learning in this trial and error.

But educators need support to shift their classroom focus from helping students get the right answer to an environment where students can learn from failure and trial and error. 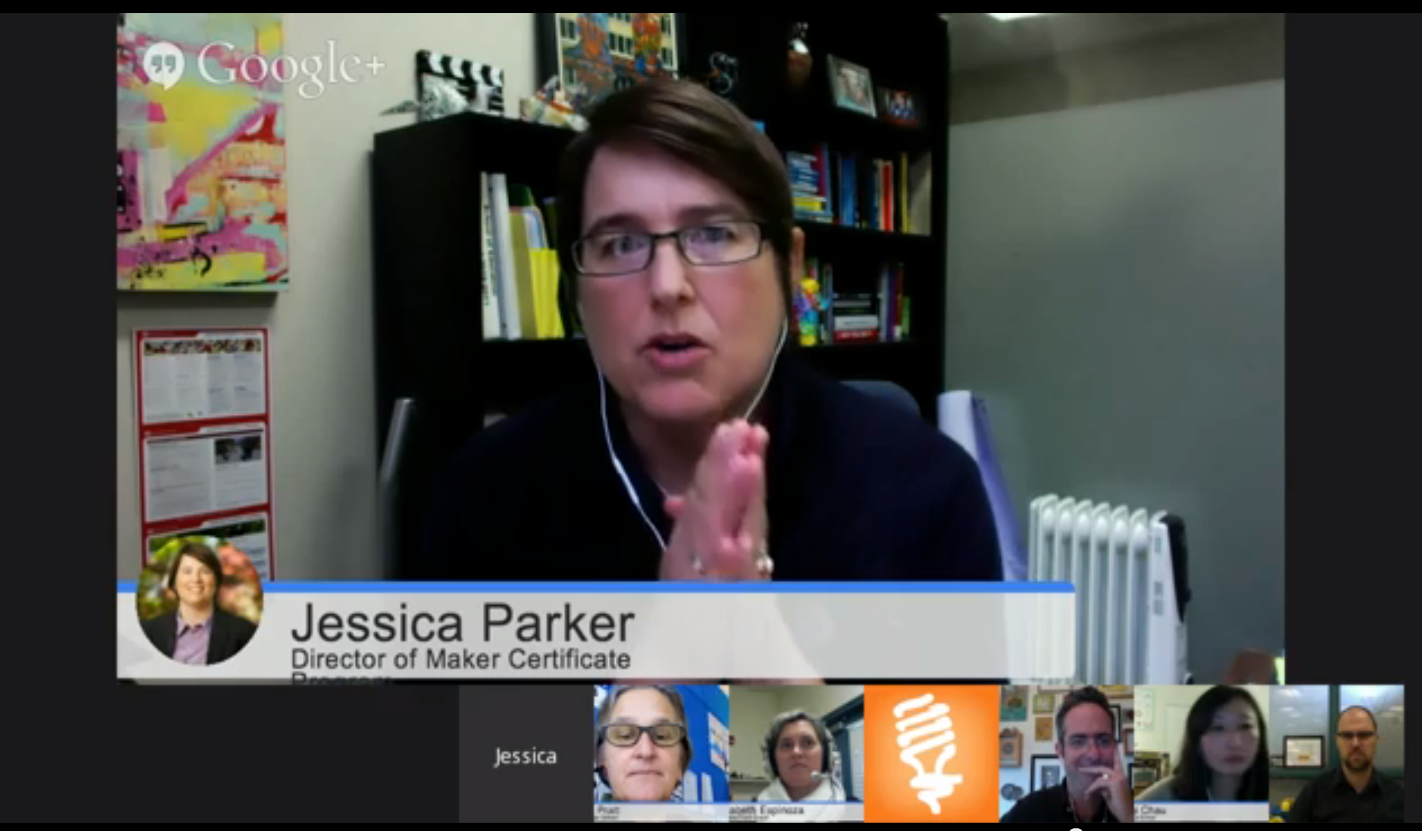 “This shift in focus is much more observable and understandable when an educator actually makes and goes through the design process and reflects on that process. And I define that process as learning,” she said.

Parker also recently moderated the Educator Innovator webinar on making in K–12 settings, which Pratt participated in. Five educators from the Bay Area, who are all instrumental in integrating makerspaces or making into their schools, talked about their own unique approaches and challenges.

“I inherited a shop program that started in 1895 but had fallen to the wayside of a college prep school,” said David Clifford, director of innovation and outreach at the East Bay School for Boys. “I had to figure out a way to redesign the program to be relevant to 21st-century students. It’s not just the hard skills. It’s all the skills needed to navigate the 21st century—perseverance, inquiry, wonder, and critical and creative problem solving skills.”

Beth Espinoza, a K–4 technology and maker coach at Marin Schools, didn’t have a makerspace to work with when trying to incorporate more making and design thinking into her school this year. So she and her team have put together a new mobile maker cart, which visits classrooms and supports classroom projects. She said although total teacher buy-in doesn’t exist yet, the excitement is slowly growing.

Sylvia Libow-Martinez, coauthor—with Gary S. Stager—of “Invent to Learn: Making, Tinkering, and Engineering in the Classroom” and making expert in K–12 spaces, has written frequently on how making in the classroom requires at least a little bit of diving in blind, like many of the educators in the webinar have done. She recently wrote that getting started with making in a classroom is a bit like channeling MacGyver—the hero from the ‘80s TV show who could fix just about anything with a paper clip.

“You can do more than you think just by trying something, refining it, and trying it again,” she wrote. “And if you notice, that’s exactly what iterative design is. Why let the kids have all the fun?”

And as tricky as the logistics and planning might be, the results of deeper, active hands-on learning may be worth it.

“We live in a world where rigor is the idea of success in schools. But rigor can also be joy,” David Clifford said. “Watching these kids as they’re making, the smiles on their faces as they’re also tearing their hair out—that’s learning. It’s messy and exciting and engaging and terrifying and hard.”

Philly Teens Prep for College Through Making and Badging

The summer before freshman year at college can be tricky—filled with anticipation, transitions, and sometimes...

Educator Innovator partner Project Zero, a research group based out of the Harvard Graduate School...

Deepening the Ways We Engage Youth as (Digital) Citizens

According to the recently released Common Sense Census, approximately six out of ten U.S. K–12...