In my last post I introduced a method for deconstructing learning games to estimate their effectiveness. Now, let’s test this method by using it to analyze a classic learning game that many of us who grew up in the ’80s and ’90s will have played: The Oregon Trail.

The Oregon Trail, first published in 1985, puts players in the role of pioneers from the 1840s making their way from Missouri to Oregon via covered wagon, and encountering many obstacles and dangers along the way.

In The Oregon Trail, you have a number of resources to manage and decisions to make. How much food do you buy? Clothes? Spare parts for your wagon? How fast is your traveling pace, and are rations limited or eaten generously? Do you try to ford the river yourself or hire a ferry? These decisions affect the long-term health of your party members and their ability to cope with difficulties that occur along the way. There are also mini-games on hunting and river rafting that introduce a few extra challenges. It’s really a rather tough experience; getting your party to Oregon fully intact is a feat that takes planning, careful resource management, and quite a bit of luck.

1. Understanding the sheer amount of difficulty that traveling the Oregon Trail entailed.
2. The names of different towns, forts, and rivers that existed on the trail back in the 19th century.
3. Facts about the history of the trail itself.

If you’ve played the game and remember nothing about the geography or history of the trail but a lot about the toll of dysentery, it may strike you that the first learning goal is the most strongly represented, but let’s see if we can figure out why.

Here’s my analysis of the original Oregon Trail.

Note: For simplicity’s sake, I combined the core mechanics (verbs) of buying, selling, and trading into ‘resource management.’ ‘Decision-making’ includes game choices that players make when they select an option from a list, like “ford the river or hire a ferry.” Other than that, hopefully the rest of the items feel straightforward and clear. 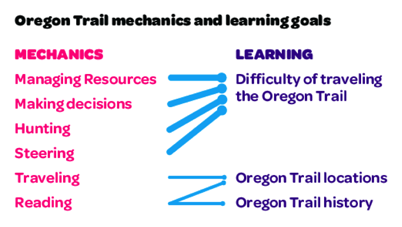 From this analysis, it seems apparent that the first learning goal is the one best represented. Most of the mechanics strongly contribute towards experiencing that sense of difficulty. The other learning goals are less well-represented, both in the quantity and quality of connections.

Why did I give traveling and reading “weaker” connections? First, I don’t think traveling or reading are strong verbs to engage in, since they are mostly passive forms of activity. Second, those learning goals are themselves not that strong. Are specific names and facts as important as an understanding of a pioneer’s difficulties? For me, the answer is no. Understanding what pioneers went through immerses me in the history and gets me asking deeper questions. Why did these pioneers choose to subject themselves to such an arduous endeavor? Did they start off as uneducated as me about the realities of the trail? Could a lot of tragedy have been avoided somehow?

It’s interesting to note how the kind of core mechanic affects the sort of learning it produces. Some mechanics, like the decision-making found in The Oregon Trail, produce learning in an experiential way that fosters deep understanding. Others, like reading, produce a passive kind of learning and usually only a surface-level understanding. This poses an interesting question: is passive learning really what you want in a game? If the learning in your game relies on reading, why make a game when a passage of text would suffice?

That said, let’s explore how we could we tweak the game to strengthen those last two learning goals. For the locations learning goal, I know I would have preferred to see my journey better represented on the map. Generally, to see the map, you must choose to look at it, and even then it doesn’t convey much information. Why not show the map whenever you set out for the next landmark, with the locations better labeled? I would have learned a bit more about each location and had a better reference for the geography involved. 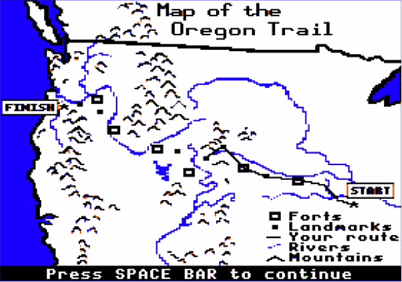 Now, let’s look at the history learning goal, which would be a challenge to strengthen without overloading the player with information. A bit more narrative when arriving at each location might help; just a quick piece of welcome dialogue as you arrive would suffice as an opportunity to inject some history. Another option would be to do more with the “talk to people” option at each location. Most of the time, it’s just a couple short snippets that give you clues as to what decision to make next. If there were options for who to speak with, such as a ferry operator, a native, or a fellow pioneer, you could have more choice in what kind of information you want to receive.

Based on the design of The Oregon Trail, it seems clear that the primary intention was for players to experience the difficulties of an 1840s pioneer, and I’d say it was quite successful in that. It may not help players recall specific facts about specific locations, but it certainly can increase their interest in the subject matter overall!

By Brendon Trombley
This post is part of a series, and originally appeared at Institute of Play.

Toward A Better Culture of Games

Posted from the White House Game Jam Let’s take it as given: there are games...

Digital Promise believes that in order for innovation to spread in education, we first have...

#write2connect and the National Day on Writing

Writing today is the way we most often connect—through texts, status updates, blog posts, and...