I was an early adopter of Twitter as a means of connecting with other educators, thanks in large part to Will Richardson and Sheryl Nussbaum-Beach. Little did I know how much it would change my life!

I loved the energy and collaboration that was happening there, as educators around the world found each other and built a network. Back in 2009, there were relatively few of us making these connections, and friendships quickly developed. For the most part, I had no idea where people lived; I just knew that they were all passionate about the work that they were doing for kids. The conversations and sharing was addictive!

One night, while I was following my Twitter feed, I saw that a number of people that I knew on Twitter were actually together at a coffeehouse in downtown Philadelphia. They had all just been to BarCamp, an unconference for computer programmers and were thinking about creating one for educators. Thanks to the Twitter world, I jumped right in and have never looked back. One moment, following Twitter changed my life! 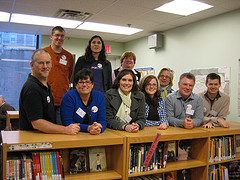 We held the first Edcamp in Philadelphia in May, 2010. We used social media to send out the word. Then, as is still true, Twitter fueled the start of and growth of this movement. People signed up and even more amazingly, people came from Pennsylvania, New Jersey and New York, fascinated by the idea of free professional development that is driven by the teachers who show up. The educators who had connected through social media now had a chance to meet face-to-face and enhance the relationships that they had already started.

That first morning, we set up the empty session board and wondered what would happen. Would people really come? It was a beautiful May morning. Staying home and enjoying the sunshine rather than making the trip into the city seemed like a real possibility. The questions kept flying between us as we set up the Sign-In table and wrote with chalk on the sidewalk to direct people to the entrance. Who would come? Would anyone want to hold a discussion or pose a question for consideration? What if nothing happened?

And what happened was magic! Educators are truly amazing people, people who care so much and work so hard for the students that they teach. They came and began the conversations, sharing with strangers their ideas and their questions. The session board filled up, and the collaboration began. People tweeted about it and around the country and the world; people began to follow #edcamp! The energy in that place gave birth to a movement that has grown in under five years from a single, initial Edcamp to over 600 events around the world. 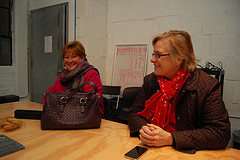 Edcamps became so powerful because they recognize and honor the expertise of teachers. Each Edcamp is organized by educators, for educators. They aren’t professional development based on what someone else says that you need to learn or know, and are truly participant-driven. The sessions continue to be developed on the day of the event, based on the interests and questions of the people who give up their time to learn from and with other educators. There are no Outside Experts; the teachers who show up, working together, are the experts.

The passion of the teachers who come is electric and empowering for all who are there. They are people who believe in doing whatever it takes to make their work in the classroom the best that it can be, bringing the best to their students. They want to grow and believe that they can, that the system and the challenges that they face are not bigger than the power of committed educators working together. While sometimes the conversation is about edtech and new tools that support student learning, in the end it is really about the students. Edcamp educators just care about the kids who show up in their classrooms every day. Taking a Saturday to learn and share is just a piece of what they give every day to make their practice the best that it can be.

The Edcamp Foundation was formed to support and enhance the work of the organizers and participants of the Edcamp movement. In October, 2014, NewSchools Seed Fund gave the Foundation a grant so that we could hire an Executive Director. The Foundation Board asked me to take on the challenge. After decades in the classroom, I decided to go for it. It was an amazing opportunity to support something that I believed in passionately. 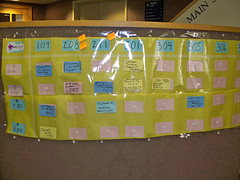 It was also slightly terrifying! It meant leaving a job that I understood to take on a whole new identity. While there are many skills that were transferrable, many have been brand new to me. Truly, being an Edcamp person saved me. The fact that I am part of a movement that so passionately believes in learning and change means that I approach each day with the mindset, straight from Carol Dweck, that believes in growth. I will slowly master all of the skills that I need. Until then, people have been amazingly generous with their time and expertise, helping me master what I need to know.

My days vary wildly, to an almost amusing degree. Because it is just me, building this Foundation and its programs from the ground up, I go from times of writing a Strategic Plan and Employee Handbook to answering tweets and explaining what Edcamp is to people who have never heard of it, from giving interviews and talking to major funders to designing a business card and reading blogs on nonprofits. Each day is a new challenge, as I make decisions about what needs to be done and then figure out how to do it.

There is never a moment, however, when I am not acutely aware that none of this would be possible without all of the dedication and hard work of every single one of the organizers and participants of each Edcamp around the world. I am simply lucky enough to now be the face of their hard work. I truly stand on their shoulders! Without their volunteer work, hours and hours of time, there would be no Edcamp movement. They are making it possible for me to talk to major funders about giving support to enhance this form of professional development. I am incredibly humbled each day by what they have made possible, and I am committed each day to give my very best to this Foundation and the people that it represents.

TeacherQuest Case Files: A New Way to Play with Food

Teachers and students at Elizabeth Forward Middle School add some spice to learning definitions and...

#CLMOOC, the Making Learning Connected MOOC, is going strong with lots of making going on!...

Parents Look to Teachers for Help Using Educational Media at...

A majority of parents say that educational media has helped their child learn a lot...

In June, a Unique Chance for Educators to Renew, Remix,...

On the eve of its third iteration, CLMOOC has expanded, but the idea remains the...