Citizen science—scientific research conducted by nonscientists—is rapidly becoming a tool to bring relevant, hands-on learning to young people. But connecting professional scientists with educators and youth can be tricky. Science center educators are bridging the gap.

The Association of Science−Technology Centers, or ASTC, an Educator Innovator partner, recently featured some outstanding citizen science projects on its blog. Many of them feature a complex set of partnerships, with science center educators at the center.

Carlin Hsueh is one of them. Hsueh has been striving to explain science to the public since her days as a PhD student in nanotechnology. “It’s been my life goal to get the science out there in ways the public understands,” she said. Hsueh got the hang of it through a yearlong National Science Foundation fellowship, where she learned to explain her work to young people by eliminating jargon and using hands-on examples.

Today, she puts those skills to work as a science educator focused on teacher professional development at the Chabot Space and Science Center in Oakland, California. She and Chabot serve as the hub for a unique partnership connecting atmospheric chemists from the University of California, Berkeley with high school teachers and students from the San Francisco Bay area, as well as GLOBE (Global Learning and Observations to Benefit the Environment). Through GLOBE, students contribute air quality measurements to a worldwide environmental database.

The partnership started when atmospheric chemist Ronald Cohen approached Chabot for help in developing an education project around the Berkeley Atmospheric CO2 Observation Network, or BeACON. Through BeACON, Berkeley scientists monitor air quality sensors mounted on 18 buildings—mostly schools—in the East Bay. The sensors measure the amounts of three key pollutants: carbon dioxide, nitrogen dioxide, and ozone. Although high school students aren’t allowed to work directly with these sensors, they can access the data they generate. Chabot created investigations that teachers could use with their students to work with the data, and he began facilitating classroom visits from Cohen’s graduate students.

At Oakland High School’s Environmental Sciences Academy, science teacher Katie Noonan took the sensors out to Lake Merritt. “It was a super opportunity for students to see how scientists deal with data that is inconclusive, or has no strong differences,” she explained. Overall, the data tended to support their hypotheses, “but not perfectly, and that was fine.”

For Noonan, who holds a PhD in biology, the opportunity to connect with working scientists—both through visits and workshops at Chabot—keeps her engaged with the latest in environmental science research. “An interested and excited teacher is a way better teacher than one reading out of a book and trying to get kids to bubble in certain things,” she said.

And the connection to working scientists is crucial for students, she added. “If we want our students to go into science, they have to be curious and excited about the unknown. If you’re around scientists, that rubs off. Doing citizen science gives some of them the bug.” 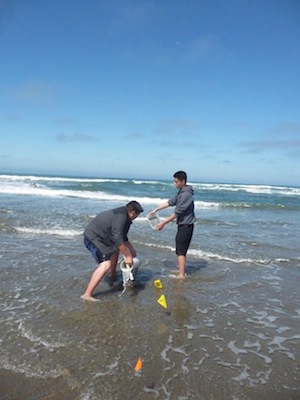 Sand Crabbing with the California Academy of Science’s Careers in Science intern program.

“We know that successful learning experiences for this age group need to be interest-driven, relevant to their lives, and technology-rich,” said Katie Levedahl, assistant director for youth programs at the California Academy of Sciences. “Citizen science allows us to touch on all three of those in an authentic way, since the data is being used by real scientists.”

But contributing data—which can take as few as 10 minutes—is only the beginning. “In order to enhance the science, we provide additional activities and investigations so the educator can facilitate a more well-rounded experience,” said Levedahl. Science Action Club participants use iPads—“loaded with extra content”—to collect data and to engage in those additional investigations. Levedahl and her staff have trained after-school program providers to use the tool. They’ve also produced “Earthquake,” and in partnership with the University of California Museum of Paleontology, “How Science Works,” for teachers.

They’re now  preparing a citizen science toolkit for release this summer to help educators use citizen science as a springboard for connected learning. Connected learning unites what kids care about the most—their social world with something they want to get better at—and then connects those with a real-world payoff, such as a better grade or some other form of recognition. The ultimate goal is to create more pathways for more young people to have opportunities for success.

In San Francisco, high school students who want to go deeper into scientific research can join the Academy’s Careers in Science intern program. Careers in Science interns are the longest-running contributors to the National Marine Sanctuaries Long-term Monitoring Program and Experiential Training for Students, or LiMPETS. Students collect and analyze data, and then they present it at a poster session during the American Geophysical Union’s annual conference. “There are papers that have been published based on research questions the interns have asked,” said Levedahl.

Across the country, in Maine, science teachers take a deep dive into citizen science before bringing it to their students. Vital Signs, a project of the Gulf of Maine Research Institute, a science center based in Portland, has developed an extensive citizen science project investigating the presence of invasive species throughout the state. Teachers attend intensive weekend and summer trainings to walk through the entire process, from framing a research question to data collection, peer review, analysis, reflection, and creation of final projects. “They modeled good teaching in their workshop,” said Rhonda Tate, an elementary science teacher at the Dedham School, approximately 12 miles southeast of Bangor. “We were the students and they showed us how you might introduce it to your class.”

Tate got her start with Vital Signs about five years ago, by searching for hemlock trees in the middle of a Maine winter. “An invasive species likes them,” she recalled. “We were proving whether we had found a hemlock tree or not. It was amazing how deep the conversation could get.”

Since then, Tate has led her students on field missions searching for Didymosphenia germinata, an invasive species better known as rock snot, and documented the quest on video. When Tate’s students posted an initial finding of rock snot, a scientist from the Maine Department of Environmental Protection contacted the class to request a second sample. Although it turned out they hadn’t found rock snot, “that was a huge day for our school,” Tate said. “Since then, kids really understand people are looking at their work.”

This visibility is an additional benefit of digital science projects. The feedback, educators find, often motivates students to go above and beyond. Feedback from a wider online audience that includes their peers can carry more weight than even a teacher’s feedback. These experiences mean more to students than simply completing a class assignment. The exchange and feedback moves learning to a more engaged level.

“Normally at the end of the year kids are bouncing off the walls,” Tate said. But not in her class, when there’s citizen science to do. “The kids want to spend recess at the stream.”

Although there are plenty of citizen science examples out there, the future of citizen science must work to break down the silos between individual projects, according to Darlene Cavalier, founder of SciStarter. Currently, there are citizen science birder projects or pollution monitoring projects, but they rarely—if ever—collaborate in larger ways. But as Cavalier says, if given the right mechanism, these communities could “self-pollinate” in productive ways, allowing people to gauge the effect of multidisciplinary learning or consider broader outcomes as measures of engagement.

Fewer silos could also lead teens and others to track their interests across projects, perhaps through digital badges or other “engagement” dashboards, creating public portfolios or other displays of their work for future employers or educators to use. Cavalier and her colleagues have begun exploring just these kinds of opportunities. As she says, you never know what can come of it when “these crazy citizen scientists, who are the most amazing people, come together and remove these artificial boundaries.”

This post originally appeared on the Startup Classroom blog. This is a big year for...

Today’s Reasons Why We Need Students to Write for Authentic...