Two weekends ago, I had the opportunity to help co-“wrangle” a floor for the 2014 Mozilla Festival, better known as Mozfest. Emphasizing the space’s festival-like ethos (as opposed to typical conference drudgery), Mozfest spills into hallways, walls, and, of course, the web with its bend toward productivity. Described as a “a hands-on festival dedicated to forging the future of this open, global web,” Mozfest brings together a global audience to spend a weekend making stuff.

As co-wranglers (with an unequivocally great team of Christina Cantrill, Paul Oh, Jane Park, and Chad Sansing, our role was to turn Floor 6 of Ravensbourne, the university that hosts Mozfest, into a space that embraced the theme “Build and Teach the Web.” With nearly 40 scheduled sessions and workspaces for participants, we attempted to make this area one that allowed participants to develop or learn about tools and pedagogies for teaching the open web in levels that matched their own expertise.

Our “Live From Mozfest” webinar for Educator Innovator is exemplary of the ad hoc nature of the space, grabbing organizers, session facilitators, and participants over the hour. The webinar captures the spontaneous, productive spirit of Mozfest.

Rather than a rehashed play-by-play of the event, I want to highlight a couple of key lessons educators and researchers can glean from the messiness of tweets, photos, and open-sourced products developed during the whirlwind weekend.

Lesson 1: It’s Okay to Have Fun

In contrast to many academic conferences, I found Mozest a space that welcomed play and one that we could actively cultivate. Oh, those red Webmaker boxes in the corner? Of course I encouraged kids to make a huge wall that they could then (immediately) smash through Hulk-style. Oh people are in a post-lunch sleepy haze? Of course my co-wranglers and I built “Fort Nap” to allow people a few minutes respite from the festival chaos. 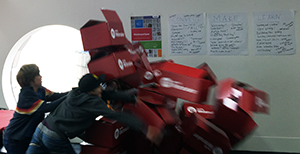 And, while these are two seemingly silly examples, we found encouraging participants to play an integral aspect of how learning and synthesis emerged on the floor. A large portion of our wall-space, for example, was dedicated to allowing participants to construct a visual narrative of where their learning was taking place and the kinds of work that was occurring on the floor. With yarn strewn above many participants that tied locations on the board to actual locations in the festival, our weekend-long in-progress work was akin to the serial killer tracking detective boards so often seen in police procedurals. More importantly, it was a visualization of the humanity that underlies the web we traffic, create, sustain. 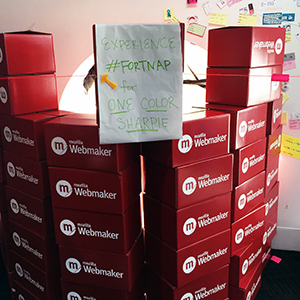 Building off the sense of play from Lesson 1, we should think about how open our space is to the needs, ideas, and whims of individuals. It is telling that every session at Mozfest had session notes that were accessible to attendees and non-attendees alike. Opening up the digital space of the conference was mirrored by the physical space of the Build and Teach the Web floor. I think this is an opportunity that is, too often, forgotten in formal learning spaces. Classrooms with seats bolted in place and LCD projectors pre-orienting participants in a specific direction, the experience at Mozfest illustrates that we need to take better ownership over the digital and physical spaces of learning that we cultivate.

As teachers, how are we hacking the environments of our classroom? More importantly, how are we working with empowered students to hack and network these spaces collectively? As a result, what new learning opportunities emerge when we define the space in relation to the activities and purposes of our learning?

The recurring mantra of Mozfest — as often invoked by Mozilla Foundation Executive Director Mark Surman — is “f it, ship it.” For Mozfest, this turns the two-day gathering into a race to create and distribute. Worrying about pristine design, structure, or other salient features is secondary to getting out the least viable product in as quick a manner as possible. I know my tendency as an educator is to wait until lessons or ideas are polished before getting them out in the open. Mozfest reminds us to just get things out there and start a loop of feedback and dialogue.

Letting go, in this sense, would be a huge step for the world of education. When considering a scale of an entire nation’s educational system, there is going to be significant discretion before just shipping out reform. But, what happens to the world of educational progress when we instill an entrepreneurial spirit into our teachers today? What if we ask them to rapidly prototype, share, and offer feedback on a massive level? Perhaps the national reform we should move toward is one that aggregates localized, quickly assembled curriculum.

Similarly, as much as this was a festival that embraced digital tools, there was less emphasis on advanced and expensive products. Things were simple and everywhere I was reminded that the digital tools we have are useful enough for powerful innovation. Sitting in on a session teaching the basics of the very old school chat protocol IRC, I was excited about the possibilities the simple system could provide to my own college courses. Likewise, sessions on building media literacies and coding skills in spaces with limited Internet access addressed equity issues and encouraged attendees to consider the possibilities for innovation that do not necessarily come with a new application, hardware device, or operating system.

Lesson 4: Don’t Forget Where the Bulk of Teaching Happens

It was refreshing to meet several educators and folks at Mozfest focused on teachers. However, as is often my concern, I hope to see more teachers in these spaces. I continually feel inspired by the possibilities that emerge from events like Mozfest; watching two attendees develop a card game that teaches young people about password security, for example, reminded me of how learning and teaching powerfully come together in these spaces. However, again, would this conversation have been made more robust with teachers helping drive it? As I was reminded at the White House Game Jam in September, transformative possibilities emerge when we bring teachers to the table in spaces of digital production. More importantly, when we assemble the tools for teaching and opening up the web, dialogue with youth and teachers — those most intimately involved in the processes of schooling — are necessary.

By Antero Garcia
This post originally appeared at DML Central

Educating for Democracy in a Digital Age in Oakland

What would fill this cafeteria at McClymonds High School in Oakland with so many teachers...

Water Bears EDU is a Systems Thinking game built by Schell Games in collaboration with...

We at NWP Digital Is are excited to join our fellow Educator Innovator partners in...