Following Hack Your Notebook Day, a nationwide paper circuitry and applied STEM learning event held this summer that brought together makers from around the country, libraries and other connected learning spaces have continued “hacking” notebooks by holding independent events for diverse groups of learners around the country.

In August, a group of teens gathered at the San Francisco Public Library, a member of the YouMedia network, to do some electrical engineering. But they probably didn’t realize that’s what they were doing. If they had they might have been too intimidated to sign up for the program.

After a short video orientation, the students—five girls and five boys—were drawing and illuminating text and images in their notebooks using copper tape, conductive thread, 3-volt coin batteries, and LED lights. Along the way, they were learning how to create basic and more advanced circuits.

Eric Hannan, teen services librarian at the San Francisco Public Library, said the students experienced “instant gratification” working on the paper circuits. The students created circuits in their notebooks by using copper tape to connect LED bulbs to the negative and positive ends of a power source, a battery. The activity required minimal prep, and students were able to jump in and get their hands dirty—or their notebooks connected—right away.

“I was surprised at how quickly they picked it up, even not really knowing any circuit theory,” Hannan said. 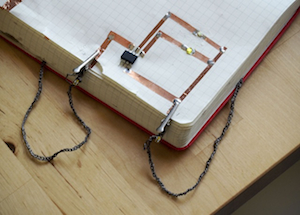 The idea for Hack Your Notebook came from a random encounter that David Cole of CV2 and Jennifer Dick NEXMAP, an Educator Innovator partner, had with Jie Qi, a doctoral student at the MIT Media Lab who focuses on blending electronics with traditional arts and crafts.

One of Qi’s projects, a circuit sketchbook made from a Moleskine notebook powered by a rechargeable battery, inspired Cole and Dick—both former educators—to create a notebook hacking kit and activities to engage students in 21st-century skills.

The team envisioned notebook hacking as an accessible, craft-based way to get students working with electronic components.

“We wanted to help them become hands-on creators instead of just artistic consumers,” Dick said.

“This taps into the maker movement in a deep way,” Cole explained. “It’s what shop classes were years ago.”

As students build confidence and gain familiarity with the materials, their notebook hacks can become infinitely complex and intricate. Students can start by building simple circuits, move on to parallel circuits, and eventually incorporate sensors to control the lights, for example, or program tiny microcontrollers to make lights blink in Morse code. Or even incorporate a Wi-Fi connection using a SparkCore chip.

The program will also be a natural fit for the San Francisco Public Library’s new teen center, set to open next spring, with its permanent maker space.

Artist K-Fai Steele, a Maker Jawn artist-mentor at the Free Library of Philadelphia, another member of the YouMedia Network, sees notebook hacking as a democratizing activity centered on student creativity and collaboration.

“It’s a much more approachable way of learning computing,” she said. “It’s accessible in a different way than something like robotics or code wars.” 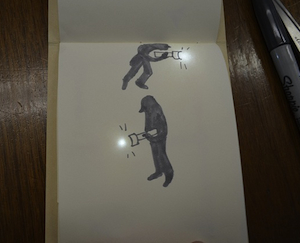 More broadly, Steele envisions maker programming, such as notebook hacking, as a way to help students articulate their own stories and struggles using whichever medium resonates best with them. For Steele, it’s “more about creating this community or learning trajectory than completing a specific project.”

“What we try to emphasize is that technology isn’t an end in itself, but it should be a support to doing something like storytelling or trying to get some sort of message across. . . . ‘Here are my big questions about the world,’ or ‘here’s what I think about my community.’”

Allowing the students to muddle through and figure things out for themselves is part of the process as well.

“When you watch someone struggle through something, your first instinct is to dive in and help the kid,” she said. “But it’s better to ask leading questions and let the person discover on their own. They learn a lot in the struggling.”

The flexible nature of paper circuitry makes the activity appealing to educators of various backgrounds. And it can even move beyond the notebook. Paper circuits can be applied to a giant collaborative mural or a storybook or recipe book, Steele said.

Back at the San Francisco Public Library, students continue to approach Eric Hannan with questions about paper circuitry. But they aren’t asking about the next Hack Your Notebook day—they’re wondering why his security badge lights up.

During the event, Hannan hacked his name badge instead of a notebook. He’s become a walking advertisement for the Hack Your Notebook movement.

The following article was first published in The Storybook and focuses on how the Imagination...

Announcing Collective Shift and Launch of the New LRNG

Today, the National Writing Project and Educator Innovator join partners across the country in announcing...

The Making Learning Connected MOOC (clmooc) that happened this summer was a great experience for me and...