For nearly a century, a beautiful domed building on the south side of Springfield, Ohio, housed a high school. But after a tobacco settlement left the state with additional education funding in 2008, the Springfield City School District (SCSD) made some needed infrastructure improvements. The two high schools were consolidated on the north side of town, and the old building was left vacant.

Kim Fish of SCSD used to look at the regal structure, modeled after the Library of Congress and topped by a stained glass dome, and think: “People used to revere education.” Fish was among many educators who dreamed of repurposing the school in a way that retained its educational mission. They found a solution through YOUmedia, a growing network of digital spaces for teens at libraries and museums across the country. 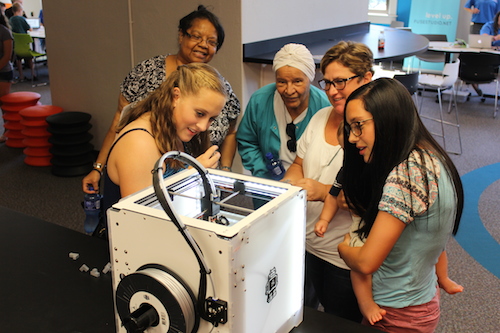 About 90 percent of students in SCSD qualify for free or reduced-price lunches, and only about half go on to post-secondary education, usually community college. The shuttered school was in a neighborhood that lacked enrichment options for young residents.

“Kids who live around this building, there was nothing there for them anymore,” said Fish, director of communications and local impact at SCSD. The closure of the school “was a gaping loss for the community.”

When the state of Ohio announced grants for educational innovation, Fish and her colleagues jumped at the opportunity. Along with opening a new school focused on STEM (science, technology, engineering, and math), they knew they wanted to create an engaging afterschool program.

Enter Grammy-winning musician John Legend. A Springfield native and education advocate, Legend pointed the district to YOUmedia, a national initiative to create digital community spaces for teens that started at the Harold Washington Library in Chicago in 2009. YOUmedia provides safe spaces for teenagers to hang out and experiment with digital tools, create media and art, and perform. Adult mentors are there for guidance and support, but youngsters are encouraged to take charge of their own learning and collaborate.

When Fish learned about YOUmedia, she thought, “Kids in this community so need this.” In June, SCSD won an $11 million state grant for the space, bolstered by $2 million in state capital and donations. Fast-forward several months, and the building, now known as The Dome, is home to the new STEM school as well as the CareerConnectED Center, which houses YOUmedia Springfield. There are also a makerspace for younger kids and a professional development space for teachers.

Fish and her colleagues relied heavily on a network of YOUmedia professionals around the country for guidance in designing the branch, and sought advice from teenagers. It made sense that young people would help craft the program; a central goal of YOUmedia is to cater to youths who do not feel valued or engaged in traditional school settings. 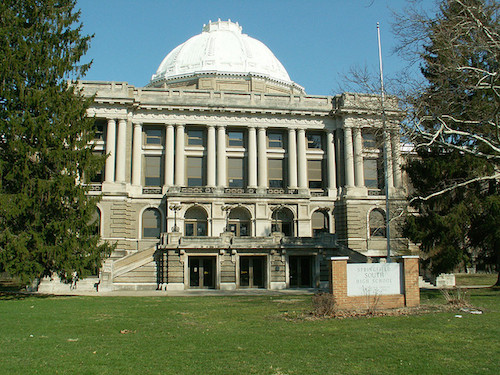 After serving as a high school for nearly 100 years, “The Dome” has been repurposed as a digital space for teens.
Photo/ Cindy Funk

The program hopes to reach teenagers who may have an interest in music or spoken word poetry or gaming, but don’t have the resources to pursue these interests on their own, Fish said. “We’ve now created a space where kids can create something that matters to them.”

While most YOUmedia branches are at libraries, Springfield’s is operated by the school district. YOUmedia acts as a laboratory for district teachers to experiment with hands-on learning models. Once kids gain a sense of direction and confidence at YOUmedia, they can bring what they learn back to the classroom.

Lead mentor Rene Stratton, who was previously a middle-school computer science instructor, said her new position has helped her forge deeper relationships with the students. “In the classroom, you have specific things you have to teach them, and you’re on the clock so there isn’t enough time for personal conversations,” she said. At YOUmedia, “I know something specific about every single one of these kids that comes in here.”

Until YOUmedia opened, 17-year-old Springfielder Dosjiné Brown would simply go home after school and take a nap or do homework. She said she “had nothing interesting to do.”

When Brown’s teacher recommended she check out YOUmedia, she was immediately game. Now there was a place where she could “go learn something that’s not just narrowed down to reading and writing and math and social studies, but actually your own creative mind,” Brown said.

Dosjiné spends her time at The Dome shooting and editing video, and socializing. Another participant, 15-year-old Mustafa Haleem, goes to YOUmedia to code and build electronics—or “stress-paint” to unwind from the school day.

Others use the 3D printers on-site or record music. Surprising the staff, many teens gravitate to the sewing supplies.

Among other surprises was the sheer number of kids who began showing up at The Dome—sometimes 100 in a night. They are kids from wildly different schools and backgrounds who make unexpected friendships in the casual YOUmedia setting, Fish said.

“These are the community’s schools and children,” Fish said, adding that they are the “future workforce and civic participants, and forging these connections between the generations, and with real businesses in our town that these kids might work for, that’s our underlying motivation.”

Where Librarians, Educators, and Media Mentors Go Online to Learn

At the YOUmedia Community of Practice site, Learning Labs practitioners from around the country share resources and...

YOUmedia Alumni Give Back to Program with Spirited Summer Festival

YOUmedia Chicago and well-known alumni/performers—Chance the Rapper and Malcolm London—attract youth to Teens in the...

In San Francisco, Teens Design a Living Room for High-Tech...