Math Teachers Circles create a space for educators to connect with the joys of discovery and collaborative problem-solving, creating lessons that inform their classroom practice.

Michelle Manes has taught math in almost every setting. She taught public high school students, deaf elementary school students, and middle school girls at a single-sex school. But eventually, she couldn’t fight the feeling that as much as she loved teaching math, she also loved doing math, so she went back to get her Ph.D. in mathematics and is now a professor at the University of Hawaii.

Although she has settled into a life of teaching undergraduate students and working on her own research, Manes still cares deeply about K-12 education. To stay connected to teachers in that world she helped start a National Association of Math Circles. The circle meets once a month and invites math teachers from all grade levels to get together and work on fun, challenging math alongside research mathematicians.

“I try to bring that creativity and joy and excitement and discovery piece into the Math Teachers’ Circle and hope it trickles into the classroom,” Manes said. Unlike other professional development opportunities, the focus of these circles is not on lesson plans or pedagogy. Most of the time is spent working on and discussing a problem that the facilitators bring, with the hope that teachers will rediscover what they love about math and how it feels to be a learner.

This issue is personal to Manes, who wanted to be a scientist as a kid precisely because she likes solving problems. Stories about how science had improved the world were exciting to her, even if the science they were doing in school wasn’t. That wasn’t true of her math classes. She grew up thinking math was about procedures applied correctly to get a right answer — something she was good at — but she didn’t associate the discipline with discovery. It was only when she got to college and took higher level mathematics that she realized how exciting it could be.

Manes hopes Math Teachers’ Circles can help K-12 classroom teachers experience the fun of working on a challenging problem collaboratively, of being confused but continuing to struggle through, of ultimately having that feeling of discovery. 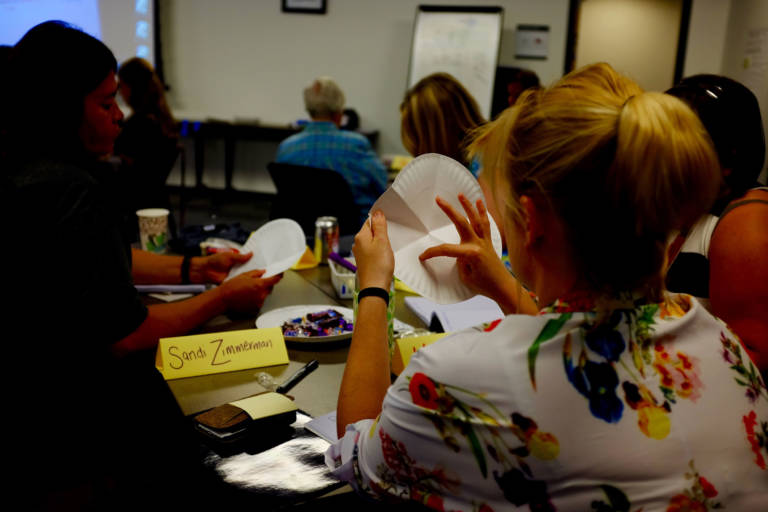 Teachers at the Crooked River Math Teachers’ Circle grapple with a problem during a week-long summer institute. (Sara Good)

“In the end we do want to transform their experience and their students’ experiences,” Manes said. The Honolulu circle is just one of over a hundred all over the United States. Every circle runs a little differently depending on its context, but in Honolulu, where weeknight traffic is terrible, Manes has found that Saturday mornings work best. Teachers and mathematicians get together and work on math for several hours and then spend some time discussing the experience and how it might apply to the classroom. Manes has arranged it so teachers can get professional development credit for participating.

“For me, it’s a lot of listening, wandering around seeing what people are doing, having a sense of the room and then knowing what I want people to get out of the session,” Manes said. While groups are often working on the task from different directions or entering at different levels of understanding, Manes will often stop work if there’s something she wants to make sure all participants notice before the time is up.

“One thing I’ve learned from Math Teachers’ Circles is watching mathematicians who I have tremendous respect for make errors and be corrected and be OK with that,” said Heather Danforth. She’s co-director of curriculum at Helios School, an independent school for gifted kids in the San Francisco Bay Area. She has always thought of herself as a reader and a writer, not a math person, but when she started teaching elementary school she decided to take some classes to brush up on her math skills. That’s when she found Math Teachers’ Circles.

“It was this opportunity to engage with math in this really engaging, exciting endeavor of trying to figure out problems and maybe not always reach a solution,” Danforth said. Participating helped her revise the narrative she held about her math abilities, which was largely based on her experience of being slow with multiplication tables in third grade.

“Most mathematicians don’t really care how fast you can do your multiplication tables,” Danforth said. And more importantly, identifying herself as a mathematician and experiencing what that means, helped her think of math as primarily about problem solving. “That new definition of math allows more people to be good at it,” she said.

Danforth now leads the math teachers at her school in math circles as part of their regular professional development and they also carve out time on Fridays for students to engage in circles as well. “A well run math circle leaves everyone feeling capable,” she said. “It’s not that everyone finishes at the same place, because you don’t. But everyone has something they can engage with in a meaningful way.”

Danforth thinks of math circles as an opportunity to experience what it means to be a mathematician, whereas math class is more learning about math. She compares it to learning scales versus playing music. The scales are important, but the music is what people love, and what motivates them to continue to work at the scales. She believes that if students never experience the fun, exciting side of math problem solving, free of pressures to get the right answer in a specific amount of time, then they may never choose to pursue math in the future.

A common theme among teachers who have participated in Math Teachers’ Circles is that by placing themselves in the position of learner they are able to empathize with their students more. Many teachers felt initially intimidated to do math with professional mathematicians, as well as other K-12 teachers who may have more advanced skills.

“I felt the entire range of emotions because I was with other teachers who had different background experiences,” said Sara Good, a seventh grade math teacher outside of Cleveland, Ohio. She said she fell in and out of confidence throughout her first circle, an interesting experience since so many math teachers love the subject because it’s easy for them. 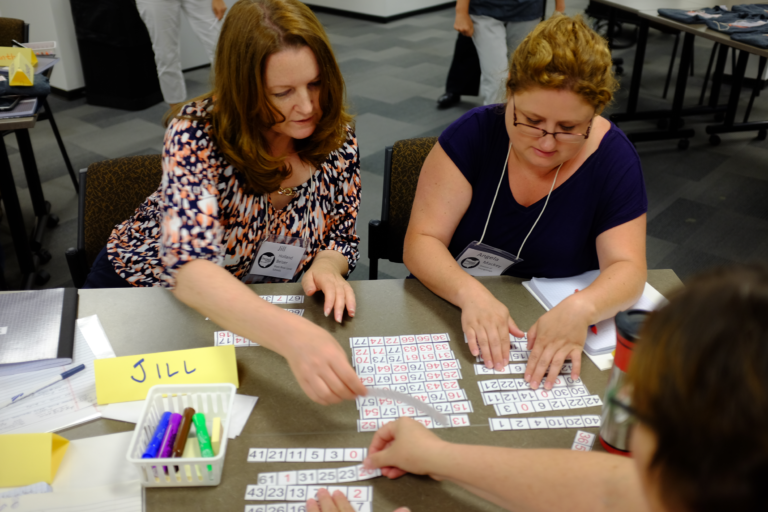 Good used to be a district math coach before cost cutting in her district landed her back in the classroom this year. She is struggling to create the vibrant community of problem solvers that she knows would be best for student learning and finds that attending Math Teachers’ Circles rejuvenates her. Participating reminds her of effective questioning strategies and helps connect her with other math teachers who want to bring a sense of wonder and discovery back to math classrooms.

Good says it’s “easy to feel like you’re off in your own pedagogical corner” a lot of the time, but the math circles remind her she’s part of a community and that playing with math is fun if it’s set up right. She also knows many of her students think math is far from fun, largely because of the way it has been presented to them in school.

Math Teachers’ Circles have become more popular in the past five years as teachers in states that have adopted the Common Core work to understand the Mathematical Practices that undergird the math they teach.

“A lot of teachers weren’t familiar with thinking about math that way,” said Brianna Donaldson, Director of Special Projects at the American Institute of Mathematics (AIM). Her organization supported the first Math Teachers’ Circle in 2006 and has helped educators around the country as they start their own.

“Each circle is intended to be a real partnership between teachers and mathematicians,” Donaldson said. And while it may seem like research mathematicians wouldn’t want to do math with K-12 teachers, the reality is that often they learn a lot about how to teach undergraduates through these circles. Everyone participating in the circle is learning the difficult lesson to “help less.”

“Learning how to be less helpful can be really challenging, but a lot of times facilitators say it has a big effect on their teaching,” Donaldson said. “It really changes how they see what the learners in whatever environment can do and what they’re capable of.”

In her research, Manes often works on the same problem for years, methodically trying different problem solving strategies to a thorny challenge that no one in the world has solved yet. That process can sometimes shake her confidence and she likes interacting with other math-lovers around fun problems as a way to remind her of her capabilities and passion for the subject.

“I would not want one of these research-only jobs where you never teach,” Manes said. “When I get stuck in research and I can go into a class and lead activities and answer questions and guide people to help them understand things, I feel really reenergized. It gives me confidence to go back to my research.” Engaging in this way reminds her that getting stuck is part of the process, and coaching other people through those emotions serve the dual purpose of reminding herself to stick with it too.

And while it’s hard to draw a straight line between the experiences teachers get in Math Teachers’ Circles and their approaches to the classroom, Manes said that many of her participants do report that it has changed how they think about teaching. They say that they’ve realized they need to give students more think time, that they focus on discourse around the mathematics more, that they assign groups to work on open-ended problems, and that they’re more open to trying new things in the classroom.

The American Institute of Mathematics is excited about how popular Math Teachers’ Circles have become and hope that soon there will be a circle within driving distance of every teacher in the country. They also hope that within five years, between five and ten percent of math teachers will be participating in a circle. They’re already supporting the creation of Math Teachers’ Circle networks within states, with Montana and Ohio closest to achieving statewide coverage.

“What we found is the more teachers go to Math Teachers Circles the more they see math is about problem solving,” Donaldson said. “And this problem solving view of math is highly predictive of really productive mindsets, like growth mindset and belief in grit, that if you persist at something you’re going to make progress. And that’s an important part of doing well at something.”

10 Ways to Engage Summer Learners in the Election

Our partner, KQED compiled a list of the ten best resources to help educators prepare...

KQED Youth Media Challenge: How Are You Stepping Up?