During the first Connected Learning Massive Open Online Collaboration (CLMOOC), in 2013, participants were encouraged to make a map. Michael Weller of the Los Angeles Writing Project turned to Realtime Board, a whiteboard-like online tool. He mapped out his students’ use of technology, as well as his own patterns as a learner and a teacher.

“This led to another insight,” he wrote on his blog. “I was doing most of the technology use in my classroom…Obviously, I needed to shift the balance toward greater student use of digital tools.”

On the eve of its third iteration, CLMOOC has expanded, but the idea remains the same: the free informal event engages educators in making and sharing, online and off. During weekly “Make Cycles,” they receive project prompts, which they can follow closely or tangentially. Projects range from the playful to the thought-provoking and, as in Weller’s case, often inspire educators to reimagine their professional practices.

This year’s CLMOOC begins on June 18, the start of the White House’s Week of Making. During each of the six weekly Make Cycles, participants attend webinars and share their makes with one another on different social platforms. 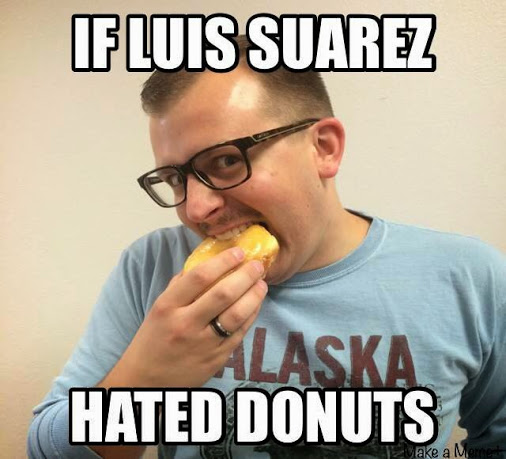 In one Make Cycle, participants had to create memes about the soccer player Luis Suarez. Photo: Benjamin David

“He said, ‘Remember, this is in the summer months, and educators are interested in things other than educating,’” Cantrill said. “Whether that’s gardening, kayaking, or making homemade bread. That has stuck with us.”

The diversity of participants is reflected in the diversity of approaches to prompts. Take last year’s assignment to hack a toy. One educator, also a mother, took one of her son’s many action figures and doused it in chalkboard paint. She invited other participants to draw something on the newly blank canvas, and the toy ended up traveling via snail mail from educator to educator, “Flat Stanley style,” said Denver Writing Project teacher-consultant Joe Dillon, a CLMOOC coordinator.

During another week, participants designed games. Infuriated by recent news that Facebook had conducted secret psychology tests on its users, Assistant Professor of Education Ian O’Byrne of the University of New Haven created a satirical digital game called Facepalm. He asked participants to provide personal responses—consensually—to psychology tests. It served as critical commentary as well as a useful collection of data.

“Part of CLMOOC is to tap into things that are already happening in the summer,” Cantrill said. Last summer, a Make Cycle about memes inspired a discussion about leveraging the power of memes to promote learning, and a contest to create the goofiest meme about Uruguayan World Cup soccer player Luis Suárez’s infamous bite.

So who is the MOOC designed for?

“Somebody who really wants to explore and connect,” Dillon said. Beyond that, there are few requirements.

“We’ve seen people who are admitted beginners really flourish,” he said. “On the other end of the spectrum, folks from higher ed, that teach innovative coursework like digital literacy, often tell us it’s some of the best professional learning they’ve ever had.” With collaboration between elementary school teachers, college professors, afterschool programmers, master tech users, and beginning bloggers, “It ends up being a pretty dynamic network.”

The facilitators and designers of CLMOOC know that these different kinds of educators have different schedules and levels of interest. So participants are free to come and go or observe from the sidelines.

“You don’t have to mortgage your summer,” said Dillon, who also works as the instructional coordinator for educational technology at the Aurora Public Schools.

This year CLMOOC organizers are thrilled about the bigger role they have carved out for Educator Innovator partners GlassLab Games, KQED, and the National Park Service. Each partner will facilitate a Make Cycle, and bring expertise related to one of three themes: identity, systems, and public.

“The leadership is becoming more and more distributed,” Dillon said.

Participants have been known to start their own spin-off Google+ Hangouts throughout the summer or engage in longer meditations on a week’s topic. The educators often “riff off each other,” Cantrill said, continuing work from previous weeks and remixing each other’s projects.

“The connected learning principle that learning should be social is represented in the way people are sharing in a social space,” Dillon said.

David Bowles, a museum educator, discusses how he has captured some of the most indelible...

Inspired by the TV show, this Shark Tank was developed by National Writing Project educators...

Connected Courses, a free open online learning experience that starts September 15th, is designed to get...