I was recently asked, “What is a current trend in education that has shaped your teaching?” My immediate response was civic engagement. Knowing the “why” of my praxis guides my choices in lesson design. As I ponder this question and my response more deeply, an unsettling feeling takes over.

How could civics learning be considered a trend? How can preparing students to actively participate in our democratic society be seen as one of the many here today, potentially gone tomorrow, initiatives in public education?

Shouldn’t developing skills to help our youth contribute, question, and make informed decisions about what goes on around them be at the heart of public education? Shouldn’t part of helping learners articulate their voices be focused on engaging in real-world challenges? If not, all the number crunching, all the empathy lessons, all the increased awareness of our histories, all the hypotheses and experiments… Why?

One benefit of civics learning is student engagement. Recently, my ninth grade English classes studied Romeo and Juliet through the lens of understanding the fine line between love and hate. Students can relate to the idea of loyalty, young love, and sacrifice.

Coupling Shakespeare’s Romeo and Juliet with Citizen Films’ documentary American Creed challenges learners to investigate their own identities. Students contemplate how this universal question of the intersection of love and hate affects them on a personal level. They explore shared values of what it means to be American (or part of American society) and what happens when these values are not always supported by actions and policies. In short, learners investigate how love for, and pride in, aspirations of a country can at times translate into acts that may be considered hateful by others, when said aspirations are not met.

Today’s youth struggle with multiple identities. They are one way at home, another at school, another with friends, another online, and so many more. It’s no wonder they have no time to contemplate the meaning of being part of American society. But their participation in voting and decision-making hinges on knowing what they value as being American.

Learners first need an opportunity to explore and express their own values. Because many of my students had never reflected on their own national identities, in this lesson, they were invited to read historical documents, poems, and other texts about the American identity. Choosing what resonated with them, students created spoken word pieces by combining words and phrases they found in their reading with their own thoughts.

Students were asked to curate symbols to accompany their ideas and create a digital story. With the help of my digital media co-facilitator Kat Saucier, learners used iMovie to sequence the images to coordinate with the narration of their spoken word pieces.

This initial taste of discovering and discussing cultural identity was an entry to a deeper dive into what it means to be part of American society. Students revisited their values and beliefs. Some were surprised at what they found. Still, others doubted the impact of a national identity on their life as a whole. What they did recognize was both common threads and differences through the American landscape. They began questioning what quelling the tension of shared aspirations with varied results looks like in action.

Making and Writing Our Future

Having viewed the film, learners are now creating short films of their own, responding to prompts created by National Writing Project’s initiative Writing Our Future. 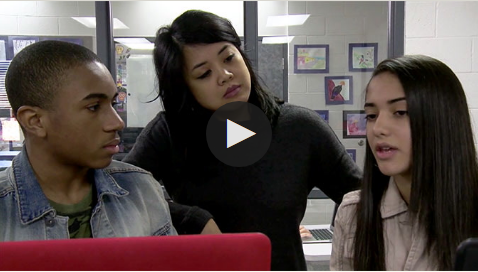 Learners have selected topics that connect to the following questions:

Topics range from exploring the genealogy and immigration stories of diverse Americans, the role of youth in movements for social change, an intergenerational look at biracial marriage, and many more compelling discussions that demonstrate civic agency. In essence, learners are equating being American as needing to be an active participant by recognizing and amplifying their voices on particular issues.

Teaching is a privilege with much responsibility. Scaffolding learners on their quests for managing their identities, without guiding in one direction over the other, (no identity is superior to another) is challenging. Still, this investigation is both worthy and necessary.

In my eyes, at the heart of education is civic engagement. It is not a trend. It is fundamental.

When students engage in high-quality discussion they enjoy their classes more and are interested in...

A New School Year And Our Greatest Fear

As the summer winds down and a new school year begins, teacher-consultant and 2014 National...

Educating for Democracy: What We Can Do

In a challenging time for our democracy, how can we help students prepare for civic...

The Digital Civics Toolkit organizes resources for engaging youth in the civic potential of digital...