“I have never experienced anything like this before, and it was awesome—to get taken out of our bubble, and to expand my understanding of people that live less than ten minutes away from me. I’m so happy I was a part of this.”

Students in southern Connecticut have been connected and inspired by the collaborative digital media project, We, Too, Are Connecticut. Funded through a 2014 LRNG Innovation Challenge grant, the project is inspired by Ubuntu, the African philosophical concept about a connected humanity that states, “I can be me because of who we are together.” Our individual experiences have power, but when shared, they have the ability to create a lasting and authentic representation of community and time.

How does this relate to the modern classroom? With new digital spaces and platforms sprouting up continuously, there are now more ways than ever to document and share our individual experiences, though they remain largely siloed.

A team of educators and students in Connecticut have imagined ways to bridge these communication and connectivity gaps with a “Digital Ubuntu” project that updates the concept to “We can be us, digitally, because of how we compose together with 21st-century tools.”

Over the course of a school year, 150 students from six diverse schools in southern Connecticut participated in an inter-district project where they created, for each other, interest-driven, production-centered work based on their experiences to spur growth and richer understanding in the greater community. In its initial run this year, the project has already increased student interaction and broadened the audience for their work.

Each of the participating schools, varying from high-performing magnet schools to high-needs schools, has taken on an aspect of the curriculum for the project, including lessons that teach digital scrapbooking, ethnography, and production skills for podcasting and presenting TedxTeen Talks. Students created video blogs, radio plays, presentations, web pages, and maps to tackle issues of community stereotypes, social justice, or simply to share personal experiences.

Take a look at a few of the works students put together in this We, Too, Are, Connecticut project documentary (created innovatively in the classroom of Shaun Mitchell, a teacher at Central High School):

Connecticut Writing Project Director and team leader Bryan Ripley Crandall described the heart of the project further. “Throughout the year, participants explored questions about what it means to be human, to have a place in the world, and to write in ways connecting human beings with human beings. The teachers united ideas through a shared reading and mentored students to compose original writing that asked them, “Why are you here?”

The participants of We, Too, Are Connecticut were able to run with the project in large part because of the foundational work of its team of educators. During an invitational summer institute at the Connecticut Writing Project at Fairfield, teachers designed a curriculum that could be easily applied and adapted across a number of platforms and mediums. The team also modeled the interdistrict collaboration by building the project with educators across the community whom they wouldn’t ordinarily have the opportunity to work with.

By encouraging the innovation of just a few educators, a large community of students were given the opportunity to grow and connect as storytellers. Said Crandall, “Through encouragement of teachers, they wrote their lives, developed their perspectives and voices, and experienced the power of communication in a wide variety of forms. The six high schools re-imagined Connecticut by advocating for student stories and experiences in creative, real-world ways.”

After spending the school year crafting projects and strengthening presentation skills, students traveled to Fairfield University for a celebration and showcase of their work, “Writing Our Lives: Digital Ubuntu.” Students took the reins and led discussions and performances throughout the day to a revolving group of 130+ of their new peers. Media professional and Pretty Wellness creator Caryn Sullivan welcomed students to the conference while TedxTeen personality and project mentor Robert Galinsky offered workshops. In addition, young adult author Matt De La Peña, whose book, We Were Here, was used as a centerpiece for teachers and students during the course of the project, gave a keynote presentation. The experience was inspiring and emotional for all involved. Said De La Peña, “I’ve never participated in anything like it. Kids from multiple backgrounds were exchanging email addresses and phone numbers after they presented their work to one another. They bonded as a community of writers. Seeing this exchange made it all come alive for me.” 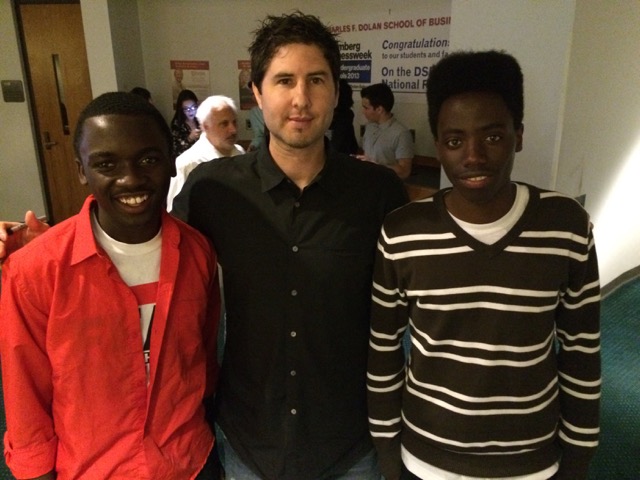 Because of its economic and opportunity disparity, Connecticut has one of the greatest achievement gaps. Breaking down these interdistrict barriers and giving students opportunities they might not have otherwise had was a central goal, but students knocking down interpersonal divisions to forge understanding and connections with one another added incredible weight to the project outcomes.

So what collective picture did students paint of their community? Though their individual experiences differed, most of the student projects emphasized their similarities. Said Crandall, “Whether a spoken-word performance, an honest confession about life’s struggles in a TedX Talk, or a Vlog to take a stand, students realized how important writing is for helping human beings to communicate with one another; the wisdom of many communities makes the human community stronger.”

Deep Center: How a Strong Pedagogy Allows for Improvisation and...

One year ago we were able to invest in this inspiring and transformational work through...