At Bath County Middle School in Eastern Kentucky, a community block party is underway. All around, students excitedly show off an incredible variety of passion projects, from homemade musical instruments and computers to an analysis of how worms interact with each of the region’s varied soil types.

On one side of the room, spectators can dig through a sandbox, unearthing 3D-printed archeological artifacts and learning about their significance from the project’s creator. On another, they can pursue and purchase a homemade cookbook, the proceeds from which will be donated to a local social services organization. For those interested in meta-commentary, one student has produced a comic book documenting the process of the project itself.

Some of these students generally show little interest in academic pursuits; some profess to hate public speaking. But today, passion and purpose are evident in every project, as students proudly and confidently share the results of many months of hard work. 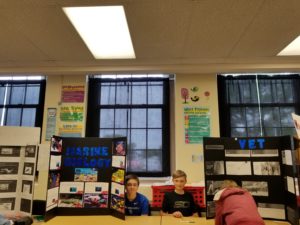 This scene is the culmination of Making a Future For All, a year-long, school-wide undertaking supported by a 2017 LRNG Innovators Challenge Grant.

Making a Future For All weaves together authenticity, passion, public voice, autonomy, and peer support into a tapestry that has expanded the possibility of what school can be at Bath County Middle School. The project has created a space for both students and teachers to realize just how much students are capable of when they’re allowed to pursue their passions, with a little support from their teachers, and a lot of support from each other.

Students spent the first third of the school year exploring their interests through a variety of activities across their core classes and electives. Using this as a springboard, students identified a particular area of interest, inquiring and experimenting their way to a passion project, which they then spent the rest of the year executing in preparation for display at the block party.

Supporting student passion projects is itself a passion project for the team of Morehead Writing Project (MWP) teacher-consultants spearheading the project: Assistant Principal Misty Johnson, 7th grade ELA teacher Vickie Moriarity, and MWP site director Deanna Mascle. Wholeheartedly embracing the ethos they were asking their students to embody, the team chose to dive in headfirst by bringing the project to every one of the school’s classrooms in the first year. 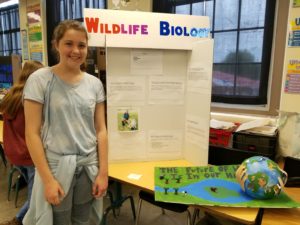 While this presented its fair share of challenges, embracing the messiness ultimately made for a stronger project. “I like going in blind a little because it really forced us to think outside the box,” says Moriarity. “If you think about it, everything we asked the kids to do, we just did. We modeled the process,” she continues. “In the middle it’s messy, and you just gotta keep working through…. I think we taught perseverance through this, just by still being here, and not just saying ‘oh this didn’t work, so we’re going to scrap it.’”

Many teachers were initially reluctant to turn their students loose on relatively unstructured projects, particularly with the final results going on public display. Unused to letting go, they were concerned about hanging their students out to dry, or exposing them to failure.

“I think the hardest thing…to grasp is that it is okay to fail the project, it is not okay to fail the process,” says Moriarity. “You can have a project that doesn’t work, but it’s experiencing the process that is the success.” Perfection is beside the point, adds Mascle. “Even if the project was not completed, or perfect, [the student] accomplished a ton to get to that point. For some kids that was a huge, huge journey. For them to stand up there and be articulate about a topic, even if their project was not a perfect accomplishment, that is a tremendous thing.”

And as the school year came to a close and the block party arrived, teachers were impressed by the quality of the work their students had produced. The project team credits this result to two main features of the project’s structure: space for students to pursue an authentic passion for an authentic audience, and a robust structure of peer support.

“It comes back to the thing we know as Writing Project teachers: that you give them an authentic purpose and an authentic audience, and everything else just comes from that,” says Mascle. “So they’ve always hated public speaking because they were talking about something they didn’t care about. But now when they care about a thing that they did, so they know all the things, they didn’t have to do research per se, because they knew it inside and out, the speaking is no big deal. And you could see that in the block party when you were going around talking to kids. They knew their stuff.”

After the initial exploratory phase, students were divided into loose affinity groups, based on the topics they were beginning to pursue. With these peer groups in place, teachers were able to step back as “a studio kind of process, where the kids were supporting each other” took over, says Mascle. 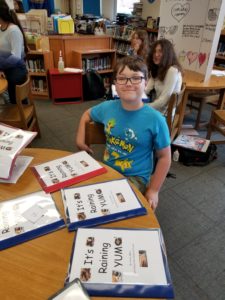 Later in the spring, the team convened a panel of 8th-graders to give feedback to the 6th- and 7th-graders. The impact these sessions had on her 7th-graders was profound, says Moriarity. “It wasn’t anything different than what I had told them in class…but there was something about that panel that made it real. And those very same things I would tell them, they would come away from their panel and say ‘I have to work harder on this,’ or ‘I better get busy.’ The authenticity of it is amazing, it totally transformed some of my kids.”

Stepping into a position of peer leadership was transformative for the 8th-graders on the panel as well. The students “owned it from the beginning, that whole pitch process,” says Mascle, developing questions and a rubric for evaluating the projects. Several of the panel’s quieter members blossomed over the course of the process as well, says Johnson. “It was really nice to see the panel because with those kids to see, over the weeks, skills come out in them that you might not see in a different situation, but in that situation, their leadership skills were very, very evident.”

After a very successful year one, Making a Future For All is poised for even more success in year two. This year’s 7th-graders are next year’s 8th-graders, with a full project cycle and the experience of benefitting from peer review already under their belts. The team also expects that teachers, having seen the project through from start to finish, will be much more comfortable with letting go. “Until people have had the experience, it’s really, really scary,” says Moriarity.

Looking towards the long-term, spreading the project both vertically and horizontally is a major priority. The team hopes that their efforts to introduce the project to the local high school will be aided by successive cohorts of graduating 8th-graders, and aim to start inviting elementary students to the Middle School block party. They’re also hoping to spread the concept to nearby communities through their Kentucky Writing Project network, already teaching a professional development session for primary and secondary teachers in another Eastern Kentucky School District.

Says Mascle: “I wish we could spread the news broader, to the national community, that that kind of small investment is going to reap dividends for these kids for the rest of their education. And I really think it could change the trajectory of some of these kids lives. Getting them excited about school, and seeing possibilities for them of success in school that they didn’t see before…It allows them to shine…. That’s what gets me excited about this project.”

Students Tap into Passions to Serve Community With New Making...

The Philly School Media Network is building partnerships with local teachers and journalists to create...