Seventeen-year-old Arbie Nickerson has a packed schedule. On top of producing music, working at a preschool, and finishing his sophomore year of high school, he also produces his own weekly radio show through an online platform called Spreaker.

But Nickerson took on another challenge last fall, when he joined a group of teens from YOUmedia Miami to grow an antiviolence campaign called #ShareTheLove. The campaign’s goal is to flood social media with messages of nonviolence and provide a platform for students to create projects and discussions around the topic.

YOUmedia Miami is part of a network of digital spaces for teens in libraries, museums, and community-based organizations around the country designed to provide opportunities for teenagers to create using new media and technology. The spaces also give the teens a chance to learn from digital media practitioners and mentors who provide training and guidance.

Ariel Pottinger, a Miami YOUmedia mentor, said the inspiration for #ShareTheLove started in 2012 after the murder of Trayvon Martin.

“I was thinking, ‘How do the kids feel about this subject, this experience, and this story? What do they think about gun laws? What do they think about nonviolence?’” Pottinger said. She decided to host discussions at YOUmedia with teens about violence, community engagement, and connection. Pottinger hoped teens might have some interest in using the digital media skills they were learning at YOUmedia to raise awareness about stopping violence in their communities.

“It might be music, film, or photography, but how can we use those mediums to promote nonviolence in our community?” Pottinger asked. 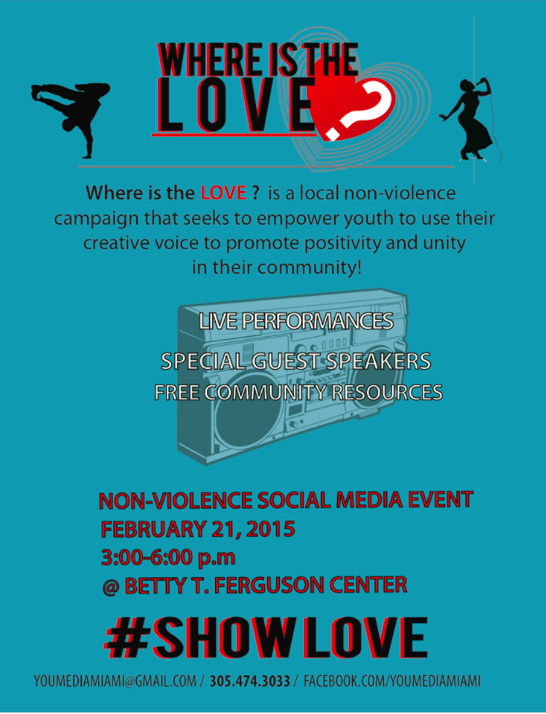 It turns out there was a way. The project expanded in the fall of 2014 when participants got approval from the library for their proposal to launch the campaign. From there, the youngsters took charge and started organizing online outreach efforts, events at YOUmedia, and a “Where is the LOVE?” concert. The team designed fliers, shot a promotional video (complete with green screen), and spread the word on their social media accounts. Youth organizers devoted many hours to the project at YOUmedia and elsewhere. Sometimes, conflicting schedules meant meeting at Subway if YOUmedia was closed for the night.

“There’d be a lot of times where I’d get calls or texts saying, ‘Ms. Ariel, I got this great idea, you’re not going to believe this.’ And I’m like, ‘It’s 10 o’clock at night!’” Pottinger laughed.

In the four years that Nickerson has been going to YOUmedia, he said he’s learned about public speaking, audio and music skills, and video production. But the #ShareTheLove campaign stretched him to work with a large team of young people his age in a new way.

“I’m so used to saying it’s my way or the highway,” he said. “But with teamwork here, you usually say, ‘We’re all going to vote on this.’”

In addition to two other events held at YOUmedia, including hosting a youth social worker who spoke about violence prevention, the teens held their nonviolence “Where is the LOVE” concert last February at the Betty T. Ferguson center, an recreation complex with an outdoor pavilion in Miami Gardens, Fla.

The concert and overall campaign were rooted in Dr. Martin Luther King’s six principles of nonviolence, which Pottinger said were important for helping teens understand that nonviolence “isn’t just something we’re pulling out of the sky. Nonviolence is real.”

“Every performer and piece connected it all [to nonviolence],” said Nickerson, who emceed the concert. “They all put their own recipe into the pot.”

To Nickerson, all the hard work was worth it. The concert packed dozens of performances into three hours, including original songs, spoken-word poems, skits, raps, and dance pieces. There was even a gymnastics act. Local performers, including poet Rebecca Butterfly Vaughn, performed as well. The mayor and vice mayor of Miami Gardens came out to watch.

YOUmedia Miami also partnered with the Trayvon Martin Foundation, the Violence Intervention Project, and the Nehemiah Project. Teens from each program performed as guest artists as well.

Since the concert, the campaign has continued to inspire other projects at YOUmedia Miami, including a short film called “Rumor Has It” that is still in production. The film is about the damage rumors can cause and about stopping rumors and misunderstandings before they spiral into anger or violence.

“Our idea is to flood the internet with positivity,” Pottinger said. Down the line, she and her students hope to partner with other YOUmedias and spread the #ShareTheLove campaign to New York, Los Angeles, and around the country.

#CLMOOC, the Making Learning Connected MOOC, is going strong with lots of making going on!...

Project Ed’s Latest Contest: A Collaboration with Participant Media and...

A new video contest from our partner, ProjectEd, in collaboration with Participant Media, calls for...

Kicking Off Science in the Park

A collaboration between the National Writing Project and the National Park Service implements programming for...