Radwan Khatib, a junior at Warren High School in Indianapolis, had always thought of art as a solo endeavor.

The “Creating with Confidence: Design Thinking for Public Art” project is supported in part by an LRNG Innovation Challenge grant. The grants stem from a partnership between the National Writing Project and John Legend’s Show Me Campaign to help educators extend time and space for connected learning. The connected learning theory posits that learning happens on a continuum—in school, as well as at home, work, and among friends—and is driven by students’ own interests and life experiences. 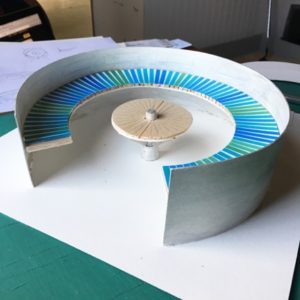 Several students who participated said that learning to listen and compromise with one another was one of the most valuable skills they learned. While research shows that professions requiring interpersonal skills in addition to technical skills are expanding faster than those that don’t, at school, students typically work in isolation.

“I’m used to making my own design and going with that,” said Radwan, “but for this [project] you had to listen to everyone’s ideas to come to a final agreement.”

Art teacher LaTonya Mason said the project also taught students to think deeply and consider multiple solutions to a problem. “The design process is more advanced, more thought-provoking than anything they’ve ever done.”

She notes that the Advanced Placement art curriculum moves briskly—with 24 artworks to complete in two semesters. As a result, she said, “I’m strict with them, ‘I need to you get this idea quickly.'”

The design-thinking project made her realize that the usual quick pace of her class might be stifling innovation and that slowing down, “asking them questions and getting them to dive deeper is going to help them creatively.”

Warren High School serves an economically and racially diverse population from the city’s East Side. Almost 70 percent of students qualify for free or reduced-price lunch, more than half are African American, a quarter are white, and the rest Hispanic, Asian, or multiracial. Although some of the 28 juniors and seniors enrolled in AP art are top students, others are struggling at home or in school and “really rely on the arts as their strength to get them through,” said Cassandra Thomas of Arts for Learning in Indianapolis, which spearheaded the project at Warren.

The project began late last fall with a series workshops at the Herron School of Art and Design led by associate professor and director of the graduate program in Design Thinking and Design Leadership Youngbok Hong. In an airy studio, she led students through the early steps in the design-thinking process, which requires innovators to define, ideate, prototype, and test.

In an early activity, Hong asked students to take photographs of their daily routine at home and school. Then in small groups, they examined their photos and answered the question, “What’s missing? What experiences would make your life better?”

Sharing experiences is a way to build the kind of trust needed to take creative risks, Hong explained. Empathizing with the problems of others is also the first step for designers in creating innovative products and services, she noted. “Not knowing what the problem is, how can you create a solution?”

To define their own problem, students spread their sticky notes on the floor and looked for patterns. A lack of communication with others and too little time emerged as the most common themes.

Next came ideating and prototyping. Hong led them through a structured series of brainstorming activities that sometimes had them expressing ideas by manipulating pipe cleaners, Styrofoam balls, and playdough. Senior Destini Ross, an aspiring museum curator, said she was fascinated by the “idea of using such juvenile, simple materials to accomplish such a complex task.”

Guided by a local artist, one class continued with time as their theme while the other tackled communication. “We did a lot of sketching and sharing sketches and editing each other’s work,” recalled senior JoDee Lynch, who intends to pursue interior architecture.

Finally, the time group settled on a video made of still photographs that expressed their theme. Over months, they collected images—a tree through the seasons, a trip down a waterslide, Destini’s uncle’s hamster running on its wheel—symbolizing time’s monotony.

To test their ideas—the final step—they collected feedback on their photographs and bench designs at an event attended by 200 students, teachers, and parents.

Radwan said creating a public artwork, instead of just “art for myself or my teacher,” inspired him to work extra hard on the bench, which will be installed in a common area near Warren, a middle school and a public library. “There’s more pressure on me to do well because I want to make sure it makes people happy.”

Based on audience feedback, the most compelling photographs and the favorite bench design went into final production. Students combined their best images in a video. They added the measurements for the favorite bench into computer software and, after further adjustments, sent it to a metal working company that they also visited to see their design cut, shaped, and welded.

In late April, at the school’s annual art fair, the completed video was projected in a continuous loop on four nine-foot high screens in the school atrium. Nearby, a portion of the steel bench was displayed along with a model of the final design.

Destini noted that the two projects were different from the other pieces at the art fair. “Most of the work is one piece by one student,” she said, “but this was a great collaborative display with 30 kids’ ideas in it.”

Teachers Are the Catalyst: John Legend Highlights LRNG Innovators in...

LRNG Innovators co-founder John Legend highlights the work of educator teams who are building the...

Linking Communities with STEM puts Compassion and Service into Practice

See how youth from socially and economically diverse backgrounds have come together, through an LRNG...