A majority of parents say that educational media has helped their child learn a lot about one or more subjects. And parents count nearly half of their kids’ screen time as educational. That’s according to a new survey-based report by Sesame Workshop’s Joan Ganz Cooney Center, which documents parents’ perspectives on their children’s informal use of educational media—including apps, games, websites, and TV shows. 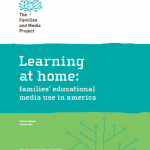 But the volume of educational offerings is vast and growing so quickly that it can be hard to figure out what actually helps kids learn. More than half of US parents with children between ages 2 and 10 would like more help finding quality educational media for their children, according to a new study. And although teachers play an important role in shaping children’s use of educational media at home, they too need guidance.

According to the survey, parents from all socioeconomic backgrounds hold similar views about which media have educational value for their children and which don’t. (The survey defined “educational” as “good for your child’s learning or growth, or that teaches some type of lesson, such as an academic or social skill.”) By their own standards, parents’ responses indicate children’s educational media use is highest between the ages of 2 and 4, when educational television programs form the bulk of their “media diet.”

Parents think of about half of their children’s media time as educational, though the proportion drops as children get older. One of the study’s most striking findings is that after age 5, children’s total media time rises from about 1.5 to 2.5 hours per day on average, but the proportion of media time spent on educational media drops from 78 percent to 27 percent.

In happier news, lower-income parents reported reading with their children for nearly an hour a day (52 minutes), and parents of all races and levels of income and education spent about the same proportion of time jointly engaged in media with their children. (With one exception: Hispanic-Latino parents were more likely to spend time engaged with their children in mobile media use than other parents.) While a majority of children have access to a tablet or e-reader, only about half of those children have read e-books. The print book is still alive and kicking.

Children spend five minutes daily or less with educational content on mobile devices, computers, and video games, according to their parents. It’s worth noting that parents say only around a third of the time their children spend using mobile devices is educational, compared with half of their TV time and that their kids learn more from TV. More than half of parents surveyed said they would like expert guidance in finding shows, apps, and games with educational value.

Teachers are helping to meet that need. “Teachers are one of the top sources of media content for kids, and that’s good,” said report author Vicky Rideout. According to the survey, 40 percent of parents with children between ages of 2 and 10 rely on teachers to help them find educational media for their children. While such recommendations are most likely to come from elementary school teachers, these days even preschool teachers and daycare providers are called upon to make recommendations to parents.

But many teachers say they don’t always know what the best resources are.

“The preservice and inservice teachers I work with are not clear on what good critical use of [media] is,” said Mary Hynes-Berry, senior instructor at the Erikson Institute. She is currently working with colleagues to develop a rubric to help teachers assess the value of apps and other digital media.

Teachers on the ground provide a fuller picture of some of the experiences the survey reported on. At Educare of Chicago, a daycare and preschool for low-income, high-risk children on Chicago’s South Side, “a lot of our children are talking about the iPad and the Kindle Fire,” said Charmaine Jones, a preschool teacher assistant. Jones noted that many of her students’ parents are in school themselves and share their technology with their children.  And they are begging for guidance, “especially when their pre-Ks are getting ready for kindergarten,” she added. Educare teachers recommend sites they use in class, like Starfall and Weekly Reader.

At West Ridge Elementary in Chicago, 3rd-grade teacher Sarah Tschaen sees parents struggling to keep up with their children’s tech-savvy. Although not all of her diverse, mostly low-income immigrant students have internet access at home, many do. And she hears concerns from parents whose children are surfing the internet rather than doing their homework.

As the report notes, “While educational media can benefit all children, the most important group to reach are those who have a dearth of other educational opportunities in their lives—this is where the use of informal educational media in the home can help fill the gaps and reduce achievement disparities.”

To give parents alternatives, West Ridge subscribes to ixl.com, especially for its math practice, and Raz-Kids, an e-book website. “We’re constantly pushing these two websites,” she said.  She especially likes ixl.com for its ability to adapt to the level of the individual child. “I’d like to see more adaptive programs that meet the children where they are,” she said.

Teachers in more affluent schools are also using digital media to build bridges between classroom and informal learning. At the University of Chicago Laboratory Schools, kindergarten teacher Delores Rita said her use of Apple’s Photo Booth caught on with parents. “Parents say they love it and use it at home,” she said. Though media use is limited and thoughtfully integrated into her play-based kindergarten classroom, she’s interested in finding software that would allow her students to create stop-animation videos of themselves using their toys—perhaps explaining how they built a Lego or block structure, for example. “These are the programs I like to see—the ones where the kids use it and are more creative.”

In choosing educational media, “there’s not a perfectly succinct answer that applies to everyone,” said Michael Robb, director of education and research at the Fred Rogers Center for Early Learning and Children’s Media. “You’re looking at the intersection of three things: context, content, and child. Are these the skills your child is working on? Does it give good feedback? Does your child want to use it?”

The Center’s position statement on young children and technology, which was authored with the National Association for the Education of Young Children (NAEYC), is designed to give advice to teachers, parents, and caregivers on using digital media with young children. They emphasize that when used appropriately, technology and interactive media have tremendous potential to nurture early learning and development and are working to provide guidance to teachers and parents to help them make wise decisions about media.

The Fred Rogers Center has also developed the Early Learning Environment™ (Ele), an online space where adults can find high-quality digital resources  to support early literacy and other learning and development for children from birth to age 5. Teachers and parents can browse free materials from around the web, including videos, games, ebooks, music, and other interactive tools from national organizations specializing in early childhood development and early literacy.

Common Sense Media is another good resource where teachers and parents can find ratings and reviews of TV shows and movies along with games, apps, and websites. Their learning ratings, as well as their new site, Graphite, are designed to help parents and educators make informed choices about the educational value of new technologies.

Content creators are forever trying to develop the killer education app— the one Rideout describes as “so fun you can’t put it down and so educational you can’t help but learn from it.” The ideal app isn’t a glorified worksheet, but an age-appropriate tool children can use to spark their creativity—a tool teachers will be happy to recommend and parents can feel good sharing with their kids.

The Beauty of Learning on Historic Land

Net Neutrality, the principle that all online content or data, regardless of who creates it...

In the Borderlands, Connecting Writing and STEM Learning