The summer before freshman year at college can be tricky—filled with anticipation, transitions, and sometimes nerves. For teens participating in a college preparation program at the Free Library of Philadelphia last summer, it was also filled with making, film production, and creating a set of badges for younger kids.

With a grant from the Philadelphia Youth Network, the Free Library of Philadelphia hired 70 recent high school graduates as “teen badging specialists.” In 10 library branches in underserved neighborhoods, these recent grads—who had all been accepted to college—were tasked with creating a pilot set of digital badges highlighting skills and knowledge younger students in middle school will need to know in high school to better prepare for college. (If you haven’t heard, badges are a new type of digital credential students can earn to show off their skills in a type of online profile.)

“They had to think through what they’ve been through, what they didn’t have access to, their struggles, and what they wish they would have known about,” said Sarah Winchowky, project coordinator at the Free Library of Philadelphia. “The whole purpose of the badging system was to help prepare other teens and preteens, because they were on the other side. They were graduated seniors who were going or had been accepted to college.”

Winchowky added that as the teens brainstormed what skills and knowledge are important for younger kids to graduate high school, they were also reflecting on a set of skills they’d need to prepare for college. For example, a badge for budget skills geared toward younger students led to discussions about financial literacy in college—like how to navigate financial aid and budget for living expenses.

Although these skills are valuable for every young person heading to college, Winchowky said the support was extra important for the majority of students in the program who were the first in their families to go to college. Those from low-income families, who are also first-generation college students, often face additional hurdles freshman year—from less familiarity with university systems, to less familiarity with the expectations and workload of college. When the Pell Institute (PDF) crunched nationwide data, only 11 percent of first-generation, low-income students graduated within six years of enrollment, compared with 55 percent of their more advantaged peers.

But beyond instilling the more traditional, helpful college tips (like the inevitable conflict resolution with roommates), Winchowky said the young people also picked up other skills the program directors hadn’t expected. 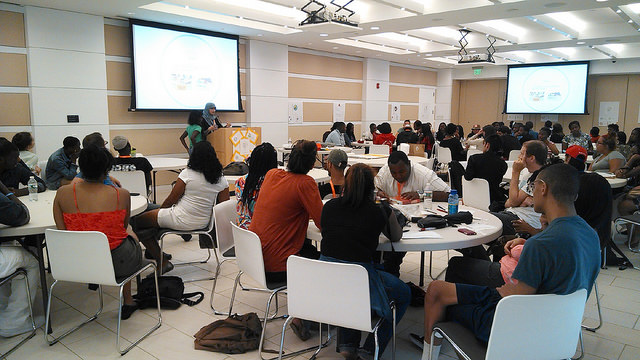 For example, the teen badging specialists worked with younger kids in the library’s Maker Jawn Initiative by making or tinkering with art and technology materials. Often, maker projects have no prescribed outcome. Rather, the making process is self-directed, letting kids tinker and make mistakes. But Winchowky said so much of that kind of free exploration has been removed from the teens’ high schools, so for many of them, it was a growth process learning how to direct their own projects based on their own interests.

“Even the older students wanted us to tell them what to do all the time,” Winchowky said. “[Being self-directed] was another hidden college readiness skill. And that wasn’t something we anticipated going in.”

The summer was also filled with opportunities for young people to get their hands messy experimenting with STEAM projects—or projects that involve some aspect of science, technology, engineering, art, or math.

“A lot of [parts of STEAM] are being cut back in schools, and kids are not getting exposure to them,” said Leslie Birch, a maker mentor with the library’s Maker Jawn Initiative, in a short documentary created about the summer program. “But I don’t even like the word ‘exposure’ nowadays. Exposure sounds like it’s some sort of disease. I like to think of it as a really happy run-in, or an awesome meet-up.”

Happy run-ins weren’t limited to STEAM. Students also directed videos like a stop-motion work out video and two music videos for original songs about badges—complete with choreography, sets, and animation.

“I really enjoy video editing,” said Tarwanda Lewis, who participated at the Lillian Marrero branch, in the documentary. “[Ever since] I first learned it in the first orientation session we did, I’m thinking about going to school for it.”

Photos/ The Free Library of Philadelphia

TeacherQuest Case Files: A New Way to Play with Food

Teachers and students at Elizabeth Forward Middle School add some spice to learning definitions and...

Collaboration, Conversation, and Reflection at the 4T Virtual Conference on...

Get ready for this year’s 4T Virtual Conference on Digital Writing with a look back...

GlassLab, an Educator Innovator partner, aims to identify what teachers want in games by employing...