What is the fastest way a teacher can spark students’ curiosity and channel their internal motivation to learn? Make a game of it.

Research on how video games can promote literacy shows that gamers want to understand game-related text badly enough to correct their own reading mistakes. Increasingly, classroom teachers and even entire schools are using games to build students’ reading and writing skills.

A 2010 paper by associate professor of digital media Constance Steinkuehler and colleagues at the University of Wisconsin showed that when struggling readers read from school-based and game-based texts chosen by researchers without regard for student interest, the struggling readers showed low performance on both kinds of text. However, when a handful of struggling readers were given game-related texts seven to eight levels of difficulty above their tested reading level that matched their interests, they read them accurately and independently.

“When they choose the text, when they care about it, they actually fix their own comprehension problems more than two times as often as when they don’t care about the text,” Steinkuehler told Edutopia in this 2013 video.

Steinkuehler’s research is inspiring teachers to bring games into the classroom. At West Pender Middle School in Burgaw, N.C., Lucas Gillispie, a teacher and instructional technology coordinator, credits Steinkuehler’s work for inspiring his World of Warcraft in School project. 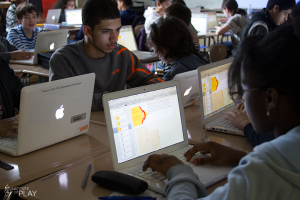 “There’s a lot of reading inherent in World of Warcraft play,” Gillispie said.

Becoming an excellent player requires reading online references like WoWWiki.com, which includes vocabulary found in academic textbooks across many subjects and is written at a level of difficulty appropriate for students nearing the end of high school or high school graduates.

Gillispie’s project started as an after-school club integrating academic skills, including literacy, with the online game World of Warcraft. It has since evolved into an elective language arts course using Guild Wars 2 as the game platform through which to build literacy skills. Students learn about different literary genres—from poetry to propaganda—and write mission statements for their guilds, or groupings of players who work together to play more successfully.

“The kids run to this class,” said Gillispie. “We don’t give them homework, but we find students logging in to advance on their work at night.”

The secret of games’ success—their power to spark and channel students’ motivation to read and understand complex content—isn’t confined to digital games. Founded in 2007, the Institute of Play has designed and opened two secondary schools devoted to game-based learning: New York City’s Quest to Learn, a public school, and ChicagoQuest, a charter school. Though the Institute of Play designs digital games like SimCityEDU, a city-building game that teaches principles of urban planning, digital games are just a piece of its games-to-learn picture.

At Quest to Learn, game designers like Shula Ehrlich work hand-in-hand with classroom teachers and “learning designers,” veteran educators with advanced degrees who understand both traditional instructional methods and the Quest to Learn model. Together, they develop games targeting specific instructional skills.

“The majority of games we make are board games and card games,” said Ehrlich who’s employed by the Institute of Play but works inside the Quest to Learn school.

For example, Ehrlich worked with a classroom teacher and learning designer to create Snack Wars, a game to teach students the basics of argumentation. Students work in groups to propose an official school snack. They make their case based on a variety of evidence—from nutritional information to survey data showing the most popular kinds of snacks. Having easy-to-understand evidence at hand keeps the focus on what evidence makes the best case and why, Ehrlich said.

“When we have students practicing a skill like making an argument and supporting it with evidence, we want them to have super-accessible content to grapple with,” Ehrlich said.

Games can also morph from non-digital to digital formats. That’s what happened when Jason Darnell and Rick Brennan, former middle school history teachers from the Houston area, began developing Historia, a simulation game to teach ancient history. After more than six years of refining their original, technology-lite version of the game, Brennan and Darnell are launching a beta test of the digital version in 25 classrooms around the country on May 5.

“Games give kids a choice, a context they can dive into. And they really produce some amazing stuff,” said Darnell, now president of Histrionix Learning Company.

In Historia, student teams govern their own fictional societies and strive to keep them strong in the face of competition from great civilizations of the past. To succeed, students must research their competitors’ civilizations and understand how key events in each era affected them. Students also develop writing skills by answering essential questions about each civilization they encounter and by learning to write argumentative essays.

“The way to do better in the game is to research. The more you know about the civilizations you are going to encounter, the more you will succeed,” Darnell said.

Games even inspire students’ storytelling. At Quest to Learn, a seventh-grade English teacher wanted to design a game that would allow students to practice using literary elements like setting, characters, simile, and metaphor. She and Ehrlich worked together with a learning designer to create Story Weavers, a collaborative writing game that uses Keynote presentation software.

“Every slide of the Keynote presentation is a different part of the story,” Ehrlich said. Students choose from groups of cards offering varying settings, protagonists, and other literary elements, then use them to write their own stories. “In a group of four kids, four stories are being written simultaneously.”

The game has been adapted to brainstorm essays and write fiction of varying genres. A particularly successful variation grew out of a quest related to dystopian fiction.

“Ultimately, kids had to write their own dystopian fiction. They could use the group story as a base for their own work,” Ehrlich said. “Initially, kids were resistant to a writing piece. In this context, they’ve really liked it and had fun with it.”

Interested in learning more about how to use games in your classroom? The Institute of Play has resources that can help, including videos and design packs to empower educators to create their own game-like learning experiences.

Top photo/ Institute of Play: Ninth-graders discussing To Kill A Mockingbird while playing Socratic Smackdown in their English Language Arts class at the Quest to Learn school.

What do game-based learning strategies look like when applied to literacy teaching and learning? We...

It has become increasingly clear that youths’ experiences in schools do not match the kinds...