A program based in Brooklyn, NY, makes learning enticing for teenagers, combining topics they might already know a thing or two about: fashion, technology, and video games.

“Playable Fashion” began in 2012 as an afterschool program at the nonprofit art and technology studio Eyebeam. Today the teenage participants learn about electronics, coding, and “wearable technology” (think light-up shirts or “smart” watches). Ultimately, some design and create their own wearable video games—with controllers made out of gloves with built-in hand sensors that control what is happening on the screen.

Aided in part by an LRNG grant, the program has been able to investigate how to adapt the curriculum beyond the afterschool program for use in other settings.

The LRNG grants stem from a partnership between the National Writing Project and John Legend’s Show Me Campaign to help educators extend time and space for connected learning. The connected learning theory posits that learning happens on a continuum—in school, as well as at home, work, and among friends—and is driven by students’ own interests and life experiences. 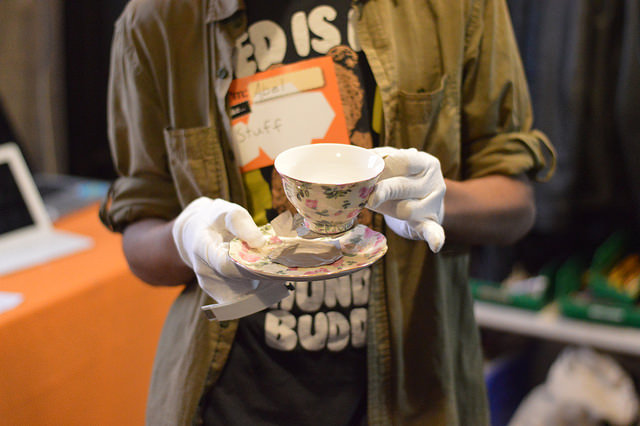 With funding from LRNG and other sources, the Playable Fashion creators have taught workshops for teens at other community sites, led professional development programs for educators, and developed an adaptable curriculum. They are collaborating with a teacher at Brooklyn’s Academy of Innovative Technology (AoIT) high school on a full course on game literacy and design this year.

Participants in Playable Fashion amass concrete tech skills—the sort that could come in handy after graduation. But the creators of the program say the skills they are teaching extend beyond the technology and gameplay, and that educators of any discipline can incorporate the lessons into their practice.

On the first day of any Playable Fashion program, creators Kaho Abe and Ramsey Nasser have the students play a simple analog game—that is, a game they play with their bodies, not with gaming consoles or keyboards. Often they will start by playing ‘Ninja’, a multi-player physical game where players stand in a circle taking turns swiping at their neighbors’ hands to eliminate each other until one player remains.

“We’ll step back and analyze the experience we just had,” Nasser said. The exercise breaks the ice and it gets students in the “mindset of a game designer.” The students pick apart what worked and what didn’t, suggesting modifications to the rules to improve the gameplay. In doing so, they begin to understand how even the most complex high-tech games begin with many of the same fundamental elements.

Playable Fashion is one of many efforts to convert kids from consumers of technology and media to producers of it. The activities in the program help young people recognize that the digital tools that dominate their lives are accessible and malleable.

That experience instills a sense of agency teens can hang onto in their daily lives, no matter what kind of career they pursue.

“We’re pulling the curtain back from the world of experiences kids consume by default,” Nasser said. “We’ll explain a certain technical trick and we’ll have a kid raise his hand and say, ‘Oh my god, is this how Assassin’s Creed works?’ You start to understand that you yourself can make these things.”

Throughout the program, students build critical thinking skills and begin to critique the media they use daily, Abe said. Designing wearable games also raises its own set of discussion questions, she said. How does one design a product that is comfortable or appealing to people with different bodies and backgrounds? What kinds of social dynamics come up during competitive gameplay?

The transferable skills that Playable Fashion participants gain make the program ripe for integration into a number of education settings, the creators believe. They have worked to make the curriculum implementable anywhere, from a technology lab to a humanities classroom.

Krystel Theuvenin, the teacher at AoIT, has been helping her students design and build alternate video game controllers. They learn how to use Arduino kits to create the controllers, but the skills they are picking up from Playable Fashion “boil down to project management, programming, and conceptualization,” she said.

The curriculum Abe and Nasser teach to educators is divided into a set of separate but complementary activities. Depending on their own depth of technology knowledge, teachers can pick and choose which lessons to use. Some activities, like the game literacy lessons, encourage critical thinking and discussion. Others are more hands-on. The electronic toys lesson teaches participants the basics of hardware. It can be followed by the fashion lesson, where participants learn about sewing, soft circuits, and LEDs.

In one Playable Fashion activity, students learn the fundamentals of coding by embodying the parts of a basic computer themselves and reacting to programming commands. In another, students make the wearable game controller gloves. One participant in this activity created a video game in which the player is a “fancy tea drinker” who battles with a coffee drinker. He built a custom controller out of the gloves and an actual teacup and saucer. The player triggers attacks in the game by lifting his or her pinky, or lifting the cup off the saucer. The young designer, now a game design student at New York University, presented his creation at a digital media festival wearing a bowler hat and a monocle.

Adapting their afterschool program for diverse educators has been eye-opening for Abe and Nasser. The training is a series of two-way exchanges where they, as programmers and artists, get a better grasp of the kinds of lessons teachers are looking for and the support they need. They in turn help educators navigate new territory.

It’s a challenging project, but one that has been rewarding so far.

“We teach the tools we actually use to make games, as opposed to education-specific or watered down versions,” Nasser said. “There’s an honesty to that that’s important to us. The hope is to translate that honesty to other teaching environments.”

A National Push for More ‘Active Use’ of Technology in...

In its 2016 National Education Technology Plan, the Department of Education emphasizes model approaches to...

Our December reading for Literacy, Equity + Remarkable Notes = LEARN, considers the shortcomings of...

Collaboration, Conversation, and Reflection at the 4T Virtual Conference on...

Get ready for this year’s 4T Virtual Conference on Digital Writing with a look back...

October is right around the corner…. And that means it’s almost Connected Educator Month! Edcamps...