Its 2:00 p.m. on Friday and Steve Auslander’s Imagination Chapter is well under way. Laptops, LEGO, Play-Doh and notebooks are strewn about and the classroom is alive with excited chatter, music, and activity.

All of Auslander’s Allisonville Elementary fifth graders are huddled into groups of three or four. In the center of the classroom, a group of boys and girls hunch over their work station eagerly attempting to connect a lime and a banana to their laptop.

One student taps the banana and the kids gasp as it triggers a live drum sound through the computer. As the boy continues to tap on the fruit, his drum beat is played for the entire class to hear. Other kids use Play-Doh or pencil lead, instead of fruit, to get the same musical effect. Auslander explains to me that the kids are creating music by using a circuit board called Makey Makey, sent by our partners at SparkFun. Makey Makey is an “invention kit” that allows students to control a computer with various objects that conduct electricity. Students are also using the computer programming language Scratch.

As the different drum beats play throughout the room, a group of boys work diligently to assemble a small rotating carousel for their Batman and Robin action figures out of LEGO and littleBits, a kit of simple to use electrical components that helps kids learn and invent by building circuits. Check out the fifth graders’ Imagination Chapter inventions in this video:

The Evolution of an Imagination Chapter

Steve Auslander has been a teacher for 13 years and is passionate about merging creativity into his classroom lessons. At his school in Indianapolis, he teaches geography by setting up Mystery Skype sessions with other classrooms around the world. He helps his kids learn math concepts with hip-hop and pop songs he’s modified under the rock star alias Mr. A-Lo and he encourages kids to learn American history through plays and movies of their own creations.

Auslander, as his student Emma Sweeney tells me, “is very cool.”

To build on his work in the classroom, Auslander has closely aligned himself with the Imagination Foundation. He uses the film Caine’s Arcade and the Global Cardboard Challenge as educational tools, and most recently he became a leader of one of 30 Imagination Chapters in the pilot program that launched in the fall of 2014. His Chapter meets every other Friday afternoon and everyone in his class participates.

Chapters are rooted in Creative Play—a process that encourages kids to make the things they imagine out of whatever tools and materials they have readily available. Ten-year-old student Nick Norman tells me that during the Imagination Chapter, the students get to be as creative as they want.

When I asked Norman what creativity means to him, he says, “Pencils, paper, rainbows, and gears running in heads. The gears act like your brain. They move and give you ideas.”

Auslander decided to lead a Chapter to expose his students to real-world experiences that they may not get from their day-to-day lessons at school. And early on, Auslander says, he chose to focus the kids’ creative energy on “making the world more awesome.”

“My vision is to modify things to make them better in our classroom, our school, and in our community,” he says.

Auslander’s Imagination Chapter collectively decided that one of their first projects would be a collaboration with the Humane Society of Indianapolis.

“I reached out to someone who worked at the local animal shelter and said, ‘I want the students to design and create things that really help the animals,’” Auslander says.

MaryAnna Ferris, the communications manager at the Humane Society, was excited about the idea and volunteered to give a presentation during the Chapter’s planning session about what was needed at the shelter and what materials were safe for the animals. For bigger projects, like this one, Auslander typically divides the Chapter into planning and building sessions.

During the planning session, kids sketched their designs, fleshed out their ideas in their Imagination Chapter journals, and discussed who would bring in what materials for the upcoming building session.

Two weeks later, they worked in small groups to bring their ideas to fruition. They made beds for the dogs out of fleece and pillows, scratchers for the cats out of strips of cardboard, and toys for the animals out of tennis balls, nylon rope, and old t-shirts. 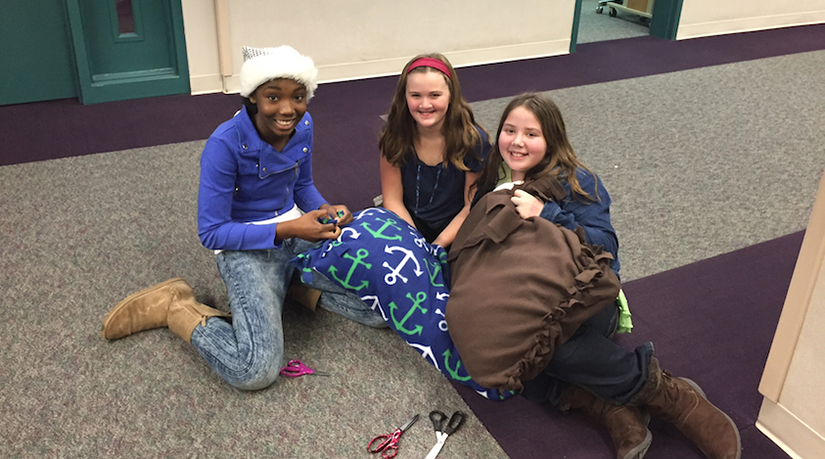 The kids thought comprehensively about the animals’ needs and practiced empathy. For example, they imagined the animals might feel stress from being in a shelter for long periods of time. To help the animals relax, some students chose to use aromatherapy. They mixed water with vanilla or peppermint oil and sprinkled it on the beds and the toys. They also brought in old PVC pipes, drilled small holes in them, and put crushed up pine needles inside so the toys “smelled like nature.”

In early January, after weeks of preparation, the class delivered the materials to the local shelter.

“It was a special experience to watch my students place beds and toys that they created into the shelter animals’ cages, and then later see the animals find comfort by resting on the beds or by playing with those toys,” Auslander says.

Ferris emailed me about her experience at the toy drop-off. She wrote: “Being able to give these kids a sense of pride, and seeing the joy on their faces as they gave back to their community was something very powerful.”

Auslander added, “I think we made the world a bit more awesome for some of these animals.” 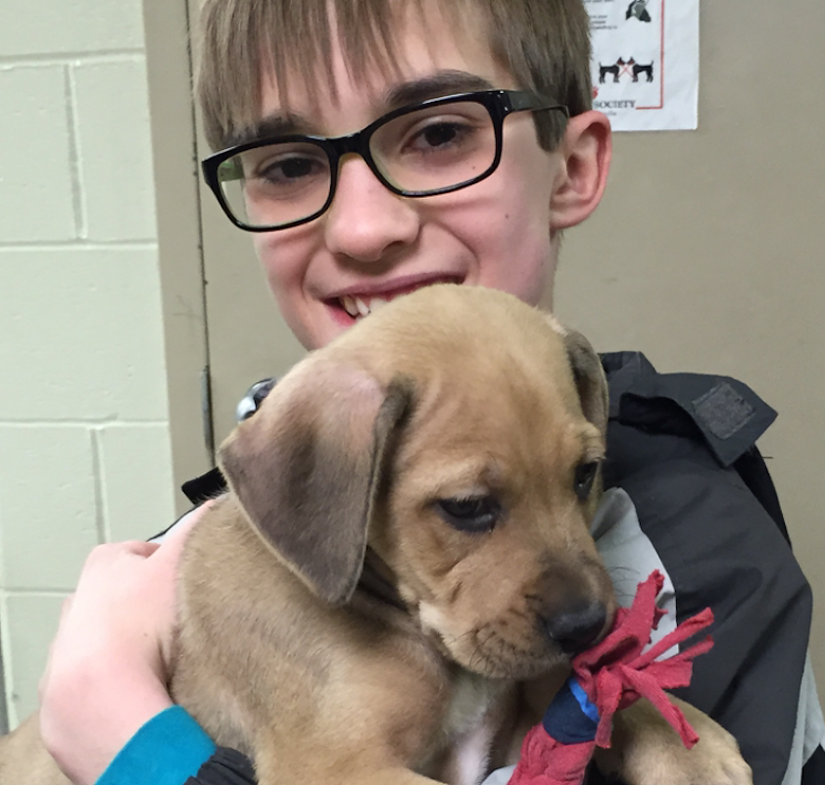 One of Mr. Auslander’s students gives a puppy one of the dog toys his class made during their Imagination Chapter session.

Because the shelter project was such a success, the Chapter is working with Ferris on phase two. Next up, Auslander’s students will create PSAs and write blog posts to help the dogs and cats get adopted.

One of the most amazing things to come out of the Chapter thus far, Auslander tells me, is that his kids are increasingly using creativity to solve problems in everyday life. “Because of the Chapter,” he says, “my students are empowered to create all the time.”

They feel more confident about taking their creative, inspired ideas and making things happen. One student, for example, created an effective cardboard iPad stand for Auslander after his expensive one broke.

Auslander’s job during the Imagination Chapter session has been to give his students “the tools to make the world more awesome.” The rest is up to them.

Do you know a budding young builder, maker or scientist? Encourage them to submit their...

From now through March 11, 2016, our partner Imagination Foundation is putting the principles of...

The Imagination Foundation invites you to become a chapter leader and join a vibrant community...

Risk-Taking for Everyone: Our First School-Wide Cardboard Challenge

This past Friday afternoon might just have been one of my favorite moments ever in...