Students take to the river, building collaboration and problem-solving skills by building and sailing their own rafts, in conjunction with a critical reading of Huckleberry Finn.

For Huckleberry Finn, the river is the ultimate experience of freedom. On the river he doesn’t have to answer to anyone. Yet it is on the river that Huck and his companions learn important life lessons: how to tackle tough problems, how to make decisions on their own, and the value of collaboration.

Peter Stapleford is a math and reading teacher at Ferrisburgh Central School in northern Vermont. And he’s always looking for ways to teach his students to take charge of their own learning, like Huck does.

Last summer Stapleford and his colleagues decided to take a page from Huck Finn. They left the classroom and took to the river for a unique summer experience designed to teach students about American history and their environment (which in this case was not situated on the Mississippi River, but the lakes and creeks of northern Vermont). Along with discussions of slavery and a reading of Huck Finn through a critical race lens, the trip would also, he hoped, show the students the strength they have within themselves to become authentic learners.

“It was just phenomenal” Stapleford said. “We got this crazy idea. How would you guys like to build a raft and float down the river?” 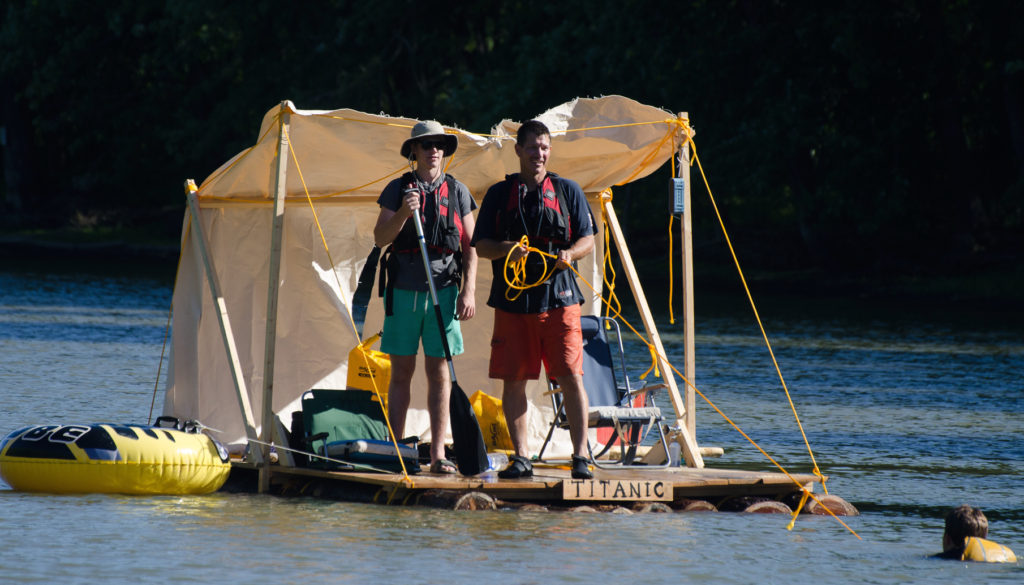 With support from an LRNG Innovation Challenge grant and through his school’s “fusion” afterschool program, Stapleford and his colleagues teamed up with the Lake Champlain Maritime Museum to offer a four-week summer program that used the adventures of Huck Finn as a template for similar adventures. Over the course of a month, students enrolled in River Adventure For Teens, read and discussed Huck Finn including themes of language, white privilege and the history of slavery in America. They also learned about the history of the lake and the river systems in that part of Vermont, worked in teams to design and build their own rafts in the museum’s boat shop, and then launched the boats down the river to Lake Champlain.

The LRNG Innovators Challenge grants stem from a partnership between LRNG of Collective Shift, the National Writing Project, and John Legend’s Show Me Campaign to help educators extend time and space for connected learning. The connected learning theory posits that learning happens on a continuum—in school, as well as at home, work, and among friends—and is driven by students’ own interests and life experiences.

Tichonuk said his goal was to create stewards of Lake Champlain. “They [the teens] are going to be the people in the future who understand and respect and take care of the place we’re living in. These are life skills.”

The students were challenged with how to turn a group of logs into a raft that would float. And they learned a great deal of specialized skills in the process of designing and building in the boat shop—bronze casting, for example, and how to use tools like a drawknife to build oars. But it’s the soft skills that Stapleford says will make the most difference in the classroom.

“When they get on the water, it is such a fluid environment, no pun intended. It is constantly changing. And there are so many variables that the kids have to deal with,” Stapleford said. “They have to solve the problems that they are facing at the time. And they don’t really have a choice to say ‘eh, I can’t…I don’t know,’ and they don’t want to do that either. There is motivation that is there intrinsically.”

Students were learning how to problem-solve, how to listen to one another, how to give one another a chance, he said. These were skills that would transfer back in the classroom in the fall.

“The water presents a really natural concrete environment where these things can be taught in a place where they are needed, so they become real for the students,” he said. “For me as a math teacher, it is incredibly valuable to have students who figure things out for themselves, who find their own way rather than sitting back and waiting for an adult to show them.”

This fall, students who participated in the program continued their work learning about the waterways of northern Vermont in collaboration with the Maritime Museum through community service projects. A group also plans to give a presentation on their raft-building program at the World Canals Conference in Syracuse, NY, next fall.

“They are learning the skills necessary to collaborate in our 21st century world,” Stapleford said. Those skills will come in handy not just in the classroom, but in their future. Stapleford hears frequently from engineers during field trips to various job sites. They consistently stress that success in their workplaces hinges on being able to work in a team environment and collaborate well with colleagues.

“Working on the water like this,” Stapleford said, “forces kids to practice those skills.”

English teacher Molly Vasich has always been curious about class participation—what prompts it and what...