Most people wouldn’t think of science as quirky, but if they’d witnessed a posse of orange, papier-maché robotic pumpkins racing down the hall at the Science Museum of Virginia (SMV), in Richmond, Virginia, they might re-think that image. Over the past several years, libraries, museums and community centers around the country have opened “makerspaces” where young people can come and play with equipment they may not have at home — like 3D printers or circuitry boards. The pumpkin race is just one example of what has come out of The Mix, the teen-focused makerspace at SMV. And while pumpkin races are good fun, makerspaces like SMV’s aim for that fun to translate into greater equity for low-income groups and people of color.

Research has found that access to technology isn’t equal across economic and racial lines. This, then, has an impact on future employment opportunities and social interaction. Jason Adkins, who manages The Mix, says that bringing kids from diverse backgrounds together exposes them to different perspectives.

“It causes a lot of friction, but it also changes perspectives and hopefully broadens their sense of the world,” Adkins says. “It’s harder to demonize someone when they are right in front of you and their not a caricature but someone you have a lot in common with.”

Matt Baker, who runs maker education at The Forge, SMV’s intergenerational makerspace, agrees that the makerspaces aim to develop more than just technical skills. “It’s an approach to learning we like to call the ‘maker mindset,’ seeing yourself as someone who can learn on their own and use the resources around them…to solve that problem,” Baker says. “We’re trying to give alums those twenty-first-century skills that tie directly into that knowledge or skill-building of persistence or grit, collaboration, motivation, all those softer skills that don’t get measured but that are just as important.”

SMV’s makerspaces, fit within a larger network of libraries, museums and community centers coordinated by YOUmedia, a program of the National Writing Project. In 2011,YOUmedia Learning Labs Network launched five labs with support from theMacArthur Foundation and the Institute for Museum and Library Services.

Now the network has grown to some 30 spaces across the U.S. that aim to both increase equitable access to technology and encourage creative learning. The network developed the HOMAGO approach to learning: hang out, mess around, and geek out.

At The Mix, teens can play with green screens, use 3D printers, and sew. The time is unstructured, with all classes and workshops being optional. Teens “need a social space to hang out and be teens and explore things without the repercussions of grades or a teacher saying, ‘this is a failure,’” says Adkins.

Zainab Hassan, 20, first came to The Mix in 2015. Now, she works there part-time as a mentor while attending community college.

“The space gave me the opportunity to learn skills I was interested in learning, but my school didn’t necessarily offer unless it was in an intensive class that required prior knowledge,” Hassan wrote in a statement provided by the museum. She also praised the fact that she was able to learn at her own pace. “This was a space that freely gave me the guidance, tools, and materials to learn new skills such as soldering and 3D printing, a pretty strong drawing point for any new teen, but it was the community that exists in the space that kept me coming back nearly every possible day.”

Adkins says that unstructured time is an important element of the learning approach at The Mix because it allows teens to play and experiment on their own with no guidelines or grades. Hassan says that this framework forced her to socialize in an entirely new way.

“The things I said and did were acknowledged and respected in a way that felt more genuine than interactions I had with people in school and at home. This helped me to become a little more confident and put myself out there and speak up more often,” she wrote.

Hassan plans to attend Virginia Commonwealth University in the fall and would like to continue working with the kind of informal education she encountered at The Mix. 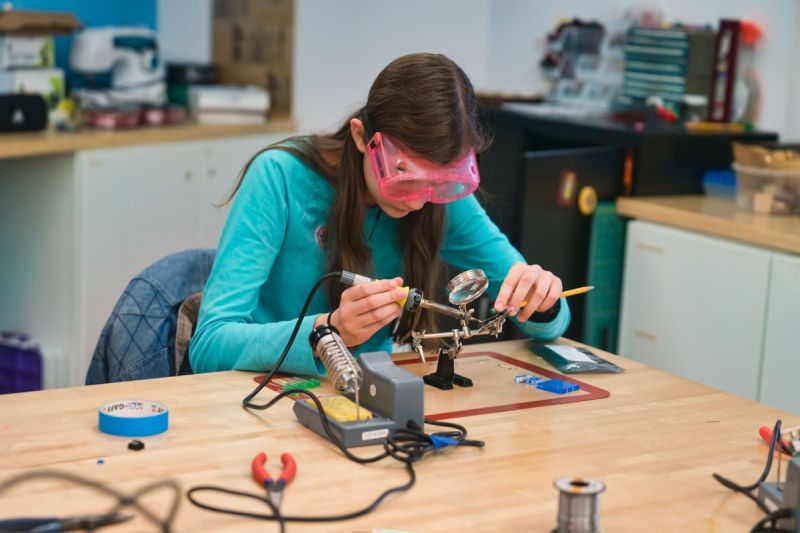 Adkins says that The Mix not only aims to ensure access to tools young people may not otherwise have, such as green screens, 3D printers and music equipment, but that it offers an opportunity to be “frivolous.”

“Play is really important for us,” he says. So is a supportive, judgment-free environment.

Jennifer Guild, who works with the museum’s communications department, says that “an encouraging voice” makes a significant difference to its makerspaces.

“That encouragement is really, really important. It’s an overlooked element in the spaces that we are offering. Encouraging someone to fail. Sometimes parents have a hard time with that. Parents have a hard time letting their kids fail,” Guild says. The payoff, she says, is that when people manage to create the thing they’ve been working on: “There’s a lot more fulfillment in knowing that they did it.”

Christina Cantrill, Associate Director of National Programs at the National Writing Project, says that while some of the makerspaces opened during the first flush of excitement about this approach to learning have closed, the majority have found institutional support from the organizations that hosted them at the outset, like the Science Museum of Virginia or the Harold Washington branch of the Chicago Public Library. The latter was the pilot for the makerspace program and initially opened for a six-month period. The library decided to make it permanent because of the positive community response to the space.

Adkins says that The Mix has hosted roughly 900 teens over the past five years, who can join the makerspace for free and also gain free access to the museum as a whole. During the school year, the space averages 140 young people between ages 13 and 18 every month. “In the summer, we see exponential growth,” Atkins says. “There are some teens who have been coming for years now.”

This post originally appeared on the Mozilla Webmaker blog At the heart of the Maker...

Parents Look to Teachers for Help Using Educational Media at...

A majority of parents say that educational media has helped their child learn a lot...

Native Students Write About Life on the Reservation

What Does It Mean to Be “Future Ready?” (Adaptable, for...

Learn more about the White House's new Future Ready initiative and how it plans to...