Using digital tools in the classroom isn’t the future of learning, it’s the present—except at the significant percentage of schools without reliable high-speed internet.

A teacher at an elementary school in a Boston suburb leads students through a story creation session using Pixie. Enabling users to combine text with images and narration, the software has the potential to help boost literacy skills and appeal to diverse learning styles. The activity falls short, but not because of an inherent problem with the program or its application in the classroom. The problem: a slow internet connection.

That was one frustrating situation Jean Tower recalls encountering when she started as director of technology at the Public Schools of Northborough and Southborough, Massachusetts, about six years ago. The regional PK-12 district’s internet connection had a capacity of less than 1 Mbps, which was inadequate for the heavy usage demands of its 10 schools. This made it difficult to run programs like Pixie or access online math games.

“Even just logging onto the computer was tough,” Tower said. “It was impossible to do anything that relied on the internet.”

Fast forward through six years of incremental improvements led by Tower. Today Northborough and Southborough public schools have a much faster connection via fiber optic lines—35 Mbps up/down speeds at the elementary and middle schools and 150 Mbps at the high schools.

Along with the increase in speed, there’s been an exponential increase in the use of digital tools in the classroom. Students now interview authors across the country via Skype and access books that match their interests and reading levels on e-readers. Teachers attend training sessions via webinar. And fourth graders collaborate on an annual ecosystem project using iPads, taking pictures and annotating their work as they go. “Without reliable [internet] access, there’s no way you can do something like that,” Tower said. 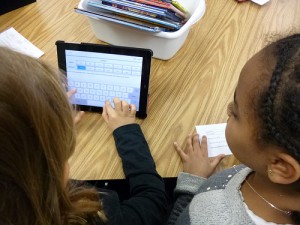 But when it comes to reliable access, many districts still lag behind, especially in poorer urban and rural areas. According to a 2013 Pew Research Center survey of 2,462 Advanced Placement and National Writing Project teachers on how they use technology, “there are striking differences in the role of technology in wealthier school districts compared with poorer school districts.”

Nearly three-quarters (73%) of teachers surveyed by Pew reported using mobile phones in the classroom or to complete assignments, while almost half (45%) reported using e-readers and tablet computers. The ubiquity of digital tools was not surprising to the researchers, said study coauthor Kristen Purcell, associate director of research at the Pew Research Center’s Internet & American Life Project.

A startling 84 percent of teachers in the study agreed to some extent with the statement that “today’s digital technologies are leading to greater disparities between affluent and disadvantaged schools and school districts.”

“What was the promise of technology that everyone saw in the beginning for education?” Purcell asked. “People talked about it as a great leveler. It was going to level the playing field for access to information… And they’re basically telling us the opposite is true, in their experience.”

While broadband wasn’t a specific focus of the survey, Purcell said that the issue did arise frequently in focus groups. Teachers in rural areas, in particular, reported being hindered by lack of reliable high-speed internet. “Low-income students in urban areas can address the shortage with mobile tools,” Purcell pointed out. “In rural areas where there is no broadband access, that isn’t the case.”

Without adequate broadband, of course, even the latest or most promising digital tools are useless. A 2013 E-rate and broadband survey of 469 school district technology leaders from 44 states by the Consortium for School Networking (CoSN) was discouraging. One finding: 99 percent of districts reported a need for additional bandwidth and connectivity in the next 36 months. Perhaps more startling, participants from “43 percent of districts said none of their schools meet the broadband goal of 100 Mbps of Internet access per 1,000 students today.”

The two biggest barriers to meeting those goals, the study found, were upfront expenses and monthly fees.

“Clearly, broadband is a huge problem,” said Keith Krueger, CoSN CEO. “Schools may be connected, but they’re at low speeds and, therefore, trying to use it for things like video or rich content is a problem.”

Lack of high-capacity broadband is only one factor, though. Internal connections are often outdated as well. “Half of the schools in the country are using old cabling which would never carry [high-speed internet],” Krueger said. “Even if you had a big fat pipe coming through the school door, the backbone is a mess.”

Krueger and his organization advocate investing at the national level to get schools up to speed. Addressing outdated plumbing and electricity in schools may not sound exciting, he noted, but it’s an essential first step.

Now, for some good news: The schools on the losing side of the digital divide may be one step closer to closing the gap. The Federal Communications Commission (FCC) recently announced an additional $2 billion investment in high-speed internet in schools and libraries over the next two years. The increased E-rate funding is intended to address the most critical needs, such as high-capacity internet and wi-fi connectivity.

An Education Week article published late last month detailed several experts’ skepticism that the FCC funding is sufficient to fully address the broadband challenge or that it will reach schools quickly enough, as most of the funding is slated for distribution in 2015.

There seems to be little doubt, however, that the funding will have an impact on digital technology use in the classroom. As Kristen Purcell of the Pew Research Center noted, “There’s no question in our study that the desire to have the best and the latest and strongest and highest-speed connection is there and that teachers would make use of it.”

And soon they’ll have even more support in doing so: In early March the Obama administration submitted a fiscal year 2015 budget request for $200 million in funding for a ConnectEDucators program. According to a White House press release, the initiative will fund professional development “to help teachers and principals better leverage new resources made available through technology.”

In Toronto, Building a Citywide Network for Learning

By Kelsey Herron The inner workings of a beehive are intricate, purposeful, and pragmatic: each...

“Why is it that when young people use technology on adult terms, they are praised...