Students and educators embrace digital writing and media-making as chance to be heard in an election year.

Before 2008, Anna Patterson never paid much attention to politics. She was 16 back then and didn’t see how actions in Washington affected her life in Tupelo, Mississippi.

That all changed when she was in 11th grade. The economy was in shambles, gas prices were through the roof, the country was fighting two wars, and a little-known senator from Illinois named Barack Obama was running against Senator John McCain for the presidency.

Patterson’s English teacher, Ellen Shelton, started guiding her class through a project from the National Writing Project called Letters to the Next President. They analyzed the candidates’ speeches and debates, parsing out what was fact and fiction, and eventually published their own letters to the next president using a then-new collaborative writing platform called GoogleDocs. Patterson and her classmates published letters about the healthcare system, marriage equality, and the recession—joining with hundreds of students around the country.

Today, Patterson is an 11th grade English teacher herself during an election year filled with surprises and high stakes. She is planning to take her students through the same process, and hopes to use the election as a platform to help her students understand the power of words, facts, and argument in a democratic society.

“I feel like I owe it to my classroom to do this again,” Patterson said. “The experience really changed my perspective on argumentative writing, and about how politics woks in this country as a whole.”

This time around, a few things are different. Letters to the Next President 2.0—or L2P 2.0—is a product of 2016 through-and-through, with KQED as a co-host and many other connected learning and media partners in the mix. In late summer, young people will be invited to formally publish their letters, in text and/or multimedia, to the  L2P 2.0 website. In the lead up to that time, the L2P 2.0 website focuses on bringing together a range of resources and opportunities for educators and mentors, meant to support creating opportunities and capacity for this work in classrooms across the country. Some of these opportunities are offered so that educators themselves, with or without their students, can try new things such as collectively annotating historic speeches online. Other opportunities are meant explicitly to support classrooms in trying their hand at some multimodal making, such as “Media Makes” organized by KQED and various partners. The L2P 2.0 website also features resources that range from helping students analyze candidates’ arguments to developing their own. A shared twitter handle, #2nextprez, allows for sharing of work, ideas and resources via social media. 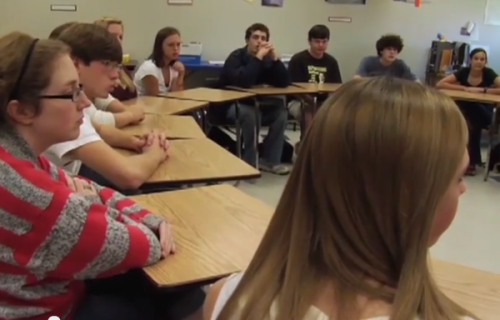 Ellen Shelton’s 2008 class used the election and Letters to the Next President as a platform to learn about argumentative writing.

Even though the circumstances surrounding the election and some of the resources are new, the heart of the project is the same. When young people write to the future president, they are in many ways writing to themselves and their community about the kind of society they envision for the future.

Michael Thompson, the National Writing Project site director at the Bisti Writing Project at San Juan College in northwestern New Mexico, said some writers dive easily into the issues but others have more difficulty because they do not see their lives reflected in political discussions.

“Like many rural places that are isolated, it’s very hard for my students to feel like they’re part of the national conversation,” Thompson said in a recent webinar about L2P 2.0. “They feel marginalized. Much of what they see in media or on TV is not about them, or people like them. It’s hard for them to feel like they’re being heard.”

But Thompson said the idea of having a national audience on GoogleDocs helped students become excited about expressing their views in 2008. They wrote about siblings deployed in Iraq or Afghanistan, or about family members with illnesses who could not get insurance coverage.

“I watched them grapple with everything one does in argument writing,” he said. “But in the end, I saw them find their voice by finding what personally mattered the most to them.”

Patterson said it’s not easy for a teacher to navigate tense political issues in a classroom and ensure all students feel respected. But during this election year, she said, she is taking advice from her own 11th grade teacher, Ellen Shelton, who reminded her students the classroom was home to the “purple party.” Instead of debating which ideas were right or wrong, Shelton focused her lessons on effective, fact-based argumentative writing.

“My hope for 2016 is that teachers use this as a jumping-off point to think about where their kids are in this universe,” said Shelton, who also took part in the webinar. She said it’s easy for adults to assume young people are not interested in politics, but in 2008 she found that couldn’t be further from the truth when she read her students’ letters. “They felt like people cared about what some kids from Mississippi had to say.”

A National Push for More ‘Active Use’ of Technology in...

In its 2016 National Education Technology Plan, the Department of Education emphasizes model approaches to...

Museum educators invite students and other visitors to share in the dialogue about art, transforming...