Civic engagement projects give students at East Los Angeles Renaissance Academy an opportunity to celebrate their community, as well as the skills and experience to make positive change.

Search for “East L.A.” on Google News, and you’ll find that most of the headlines mention shootings and car chases.

Do the same on the LA Times High School Insider site and you’ll come up with stories that paint a much more complex portrait of the community.

The articles on the site are written by students at East Los Angeles Renaissance Academy (ELARA). The high school is one of Los Angeles Unified School District’s new themed pilot schools, and its focus is urban planning. Mirroring the population in the greater neighborhood, ELARA’s student body is nearly all Latino. Many students come from recent immigrant families who are often struggling on low incomes. Like others who live there, ELARA students are subject to the negative stereotypes about their neighborhood.

“These perceptions don’t just come from the outside—they are also internalized by young people who grow up in the area,” said Mike Blockstein, Principal at Public Matters, an organization of artists and educators who design and implement creative civic engagement projects.

Public Matters and Theresa Hwang from the Dept. of Places are working with groups of ELARA students and educators—in collaboration with the LA Times, the University of Southern California Price School of Public Policy, and others—on a project that empowers students to tell their own stories about their neighborhood and gain the tools they need to make positive changes in the community.

The project, Greetings From East L.A., is supported in part by an LRNG Innovation Challenge grant. The grants stem from a partnership between the National Writing Project and John Legend’s Show Me Campaign to help educators extend time and space for connected learning. The connected learning theory posits that learning happens on a continuum—in school, as well as at home, work, and among friends—and is driven by students’ own interests and life experiences.

Greeting From East L.A. launched last spring, with a group of 12th graders who created an illustrated map of their community and generated a plan for a corridor slated for redevelopment.

The students riffed off of traditional Hollywood star maps that guide tourists to famous people’s homes. The educators challenged the ELARA seniors to come up with their own East L.A. “celebrities” and landmarks, then research, interview, and write profiles of these people and places of value. 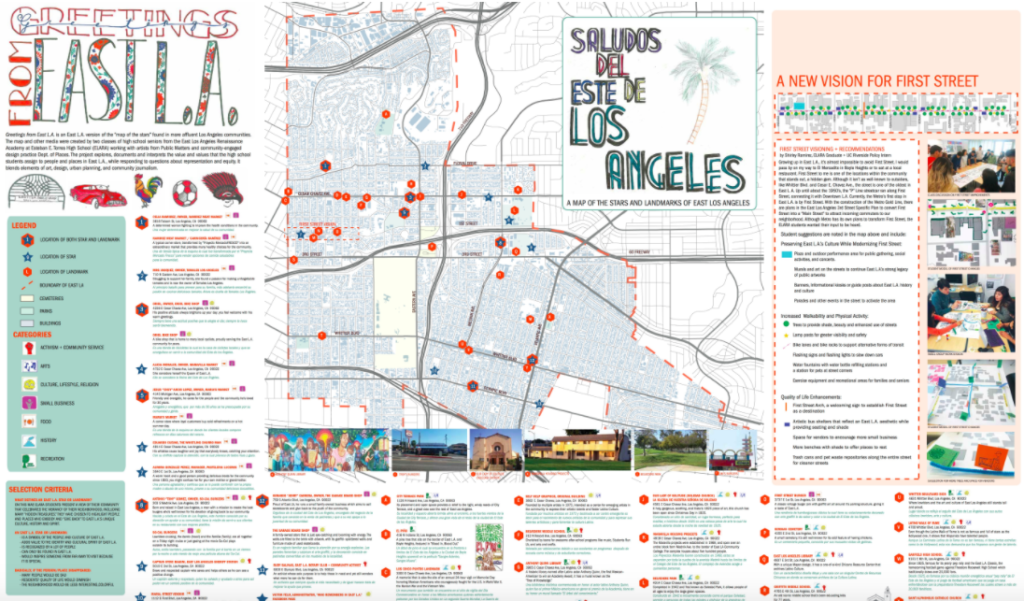 Map of the stars and landmarks of East Los Angeles. Photos courtesy of Public Matters.

At first, students claimed there was nothing special about their area. But as they thought harder about the local heroes who influenced their lives and neighborhood, “their sense of pride started to swell,” Blockstein said.

They realized their own celebrities were people like the skateboard shop owner who takes local teenagers under his wing, offering tutoring and afterschool skate practice time. Or the street vendor they can count on to sell delectable tamales and raspados.

But Greetings From East L.A. also empowers students to turn a critical eye on their surroundings, with the knowledge that their opinions matter and they have the ability to effect change. The students have worked closely with USC urban planning students, taking an observational field trip, learning to build models, and drawing up a set of recommendations for a main street redesign.

The students, it turns out, have their own expertise and perspectives that are too often ignored by planners, Blockstein said. They know, for example, exactly which bus stop is underused because it lacks shade. They proposed adding bus shelters adorned with murals like those they love in their neighborhood. They also recommended bike lanes and racks, a welcome arch designating the street as a destination, and other new features promoting walkability and local culture.

Throughout the project, ELARA students have received journalism lessons from LA Times’ community engagement editor. They, along with other teens in the area, publish stories about their lives and communities on the paper’s youth site. Many have posted personal essays about their complex relationships with their neighborhood.

“Every day when I walk out of my house, I can smell the fresh new tortilla chips being made up the street,” writes student Ismael Miranda in his article, “My community is my identity.” “Our streets shine with mural and paintings created by our people.”

Student Miguel Ceballos writes about the truths and myths in the public’s perception of his community. While there are some areas he avoids at night for the frequent gang activity, the violence hardly dominates his daily life, Ceballos says.

“I think it’s funny how most people think if you live out in East L.A. that it’s ghetto and everyone is rude because the way they look at you,” he says. “When in reality it’s the opposite, and most people out here could relate to each other.”

Writing is just one tool the ELARA students use throughout the project.

“To me it’s really important, as we look at neighborhoods and place,” Blockstein said, “to recognize that they’re all rich and complex, so there’s no single best way to describe or examine a place.”

The educators are conscious of leaving the students with real-world skills and a portfolio of work—publication in the LA Times can’t hurt—that will help them when they apply to college or jobs. A younger cohort of ELARA students will take part in a short urban planning program at USC this summer, and the hope is that some will end up attending that school themselves later on.

If they do, they will arrive on campus aware that they have the power to shape their communities.

A Free New Digital Citizenship Resource from Pivot TV and...

“This Is Media,” a 20-minute documentary on some of the thornier issues in life online...

Immigrant Teens in the South Bronx Learn the Art of...

Teachers in the South Bronx extend opportunities for student-driven online writing projects through the Youth...