The age-old art of storytelling is back in style. Personal narrative podcasts are all the rage, and “story slam” shows like The Moth draw large crowds.

A group of educators in Kansas City isn’t surprised, and they are working to bring that excitement to high schools. To them, storytelling is more than just a trend. It is a valuable practice that can improve students’ relationship to writing—and to one another. Given how storytelling draws out empathy in listeners and connects students to one another, it might also help to counteract the de facto segregation between schools in the area, the educators believe.

Katie Kline, the Greater Kansas City Writing Project director, and several colleagues put that hope to work through Kansas City Storytellers, a new group of 30 students from several high schools in the area. The students met for a kick-off celebration in February and will subsequently gather for two weekend workshops in April, where they will write and tell their personal stories.

“The expectation is that these students have stories the community needs to hear,” Kline said. “These are agents of change who want to build a community together through the sharing of stories.” 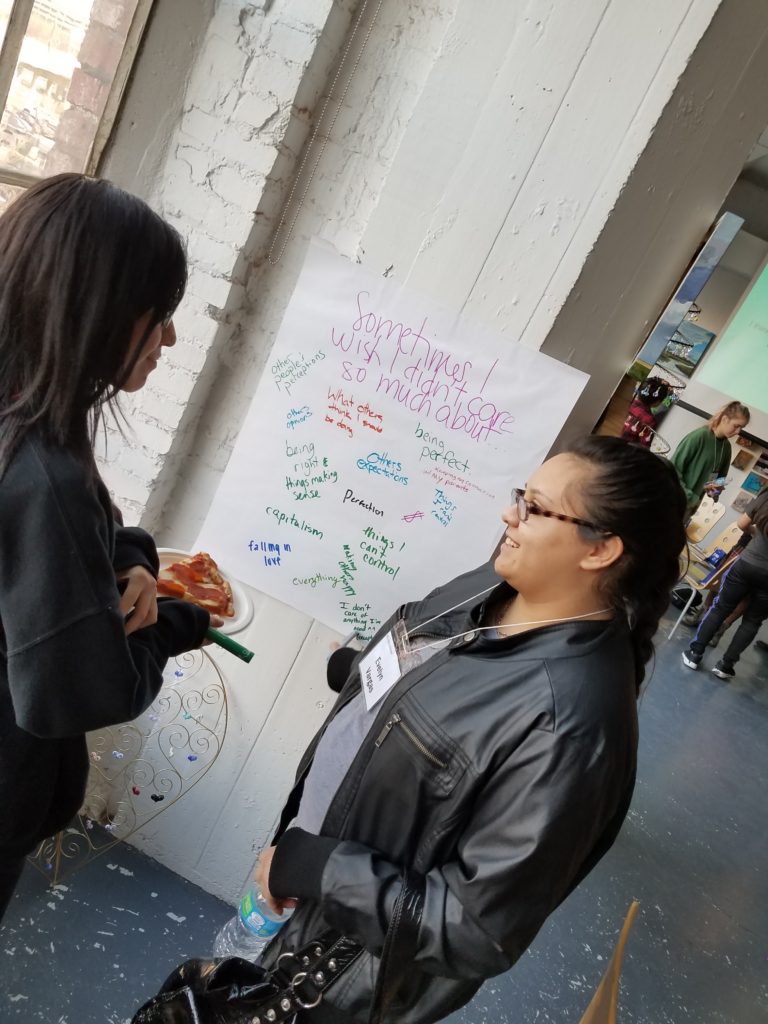 KC Storytellers is supported by an LRNG Innovators Challenge Grant. The LRNG grants stem from a partnership between the National Writing Project and John Legend’s Show Me Campaign to help educators extend time and space for connected learning. The connected learning theory posits that learning happens on a continuum—in school, as well as at home, work, and among friends—and is driven by students’ own interests and life experiences.

KC Storytellers was inspired in part by the local chapter of Louder Than a Bomb, a youth slam poetry competition whose lead organizer, Paul Richardson, helped launch KC Storytellers. Kline, who has worked with Richardson in the past, first came up with the idea to create a storytelling initiative that similarly brought together students from different schools and broke down divisive barriers.

Kline, Richardson, and other school-based and informal educators holed up over the summer to design the curriculum and take part in a storytelling workshop of their own. Their different perspectives and backgrounds allowed them to create a program that would serve the diverse population they hoped to reach.

“At the Writing Project we know that shared leadership is really important,” Kline said. “Especially if the program goals are about building community, then it makes sense to have a diverse community at the leadership level.”

They also agreed that writing was not the only goal. The students, she said, have a range of socioeconomic and ethnic backgrounds, come from urban and suburban schools, and represent both sides of the Kansas-Missouri state line. “Since there is little interaction outside of these communities, stereotypes and assumptions can guide students’ thinking about each other”—until they get to know each other’s personal stories.

The students were nominated by their teachers to apply to KC Storytellers. One of those was Matthew Trecek, a junior at Shawnee Mission East High School who heard about the program from his history teacher.

“I’ve always loved storytelling and writing in general, as it can be an amazing way to connect with just about anyone you meet,” said Trecek.

Van Horn High School senior Vanessa Ramirez, another participant, said she signed up after a teacher encouraged her to, because “I wanted people to feel and know that I am here to listen to them. Oftentimes, we yearn to be heard and understood. Perhaps I cannot understand what everybody has gone through, but I can definitely aspire to hear their story and make them feel important.”

At the April workshops, the students will read and listen to a variety of biographical and journalistic stories. The sessions will also include exercises to get students comfortable with their own voices and help them mine their life experiences for stories of all kinds.

“A lot of times students want to go to those stories of hurt and pain,”—of depression, racism, and abuse, said Kline. By encouraging students to also develop stories of “triumph and joy,” the program will give students a refuge to retreat to when they want a break from more difficult material, she said.

Brian Dolezal, one of the KC Storytellers leaders and an educator at Kansas City, Kansas Public Schools, said he thinks students often gravitate toward difficult topics when given a platform to speak because schools do not otherwise place emphasis on students’ emotional experiences and perceptions.

“Student voice is marginalized in the classroom,” he said. “This experience is an avenue to push student voice back into the conversation.”

The educators hope KC Storytellers will offer students an alternative to the more limited types of writing they are exposed to in school. They hope the program might ultimately inform school-based curricula, as the participants’ school teachers hear about the experience.

“We don’t want this to be just a one-year deal,” Kline said.

Telling Stories of Place, Change, and Culture in Alaska

The Sitka Story Lab, which helps students explore and express their stories while building writing...

Parent Playlists, from LRNG and Educator Innovator, offer activities to engage parents and kids in...