At the end of March, the most recent Future Ready Summit kicked off in Atlanta. More than 150 school and district leaders heard from education and technology experts, discussed what a “future ready” school looks like, and networked with other educators from around the region.

The summit was part of the Future Ready initiative, which builds on the White House’s much larger ConnectED. Through different means, the overall aim of both initiatives is to bring districts, schools, and libraries into the 21st century and give kids the skills and opportunities they need to succeed in a fast-changing world.

In addition to the 12 summits taking place around the country through the summer, the Future Ready Pledge is a key piece of the Future Ready Initiative. District leaders commit to working with educators, communities, and families to make their districts future ready. More than 2,000 superintendents have taken the pledge so far, and the numbers are growing.

But what does being future ready mean, exactly? There’s no single answer. One element, of course, is having the basic technological infrastructure like Wi-Fi in place. According to the Federal Communications Commission (FCC), 35 percent of schools nationwide still lack access to fiber networks needed for today’s digital learning tools.

Or, as President Obama explained at a ConnectED to the Future convening at the White House last fall, “In a country where we expect free Wi-Fi with our coffee, the least we can do is expect that our schools are properly wired.” 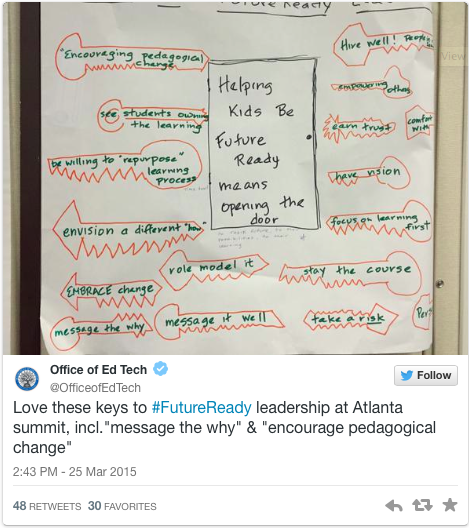 Can being future ready mean more than internet speed and devices? A panel of National Writing Project (NWP) directors and staff discussed that question on an NWP Radio episode in late February. A theme emerging from the rich discussion was that being future ready isn’t about knowing all the answers to questions about what the world will look like in 2025. It’s about asking the right questions, here and now.

“I really see the Future Ready initiative as hitting on a moment,” said Zac Chase, ConnectED Fellow at the US Department of Education. “Technology asks our districts, our schools, and our states to stop and say, ‘Hey, what is it that we want to be doing?’ It’s a question we haven’t had to ask ourselves before for quite some time in education.”

Chase described how being future ready means asking a set of questions to dig deeper into curricula and pedagogy goals. What is school for? What do we want students to be able to do? What’s your vision? What isn’t your vision?

“I find that a lot of times ongoing planning isn’t ongoing,” Hunt said. “It happens and then it stops. But I see a lot of rich inquiry built into the Future Ready materials.”

Janet Ilko, teacher-consultant at the San Diego Area Writing Project, echoed that idea: It’s impossible to know exactly what the future looks like unless you’re clairvoyant. Instead, her focus is on adaptability and accepting change as technology continues to open new opportunities for students.

“What we focus on in being future ready is the idea you’re consistently getting ready,” Ilko said. “[It’s about] your ability to morph into what’s going on in the world now as opposed to how you taught before. But not only valuing the past, but looking toward the future and what you really want to do.”

The educators also talked about the issue of equity and how being future ready means considering how new tools and practices promote—or discourage—a more equitable future for students.

“Instead of thinking about, ‘What device do we want to buy?’ we try to think about what tools do we have at our disposal and how are we using those toward a more equitable future for the students we serve,” said Joe Dillon, instructional technologist and teacher-consultant at the Denver Writing Project.

What’s a first step for a district looking to get involved? Ask your district leader whether he or she has taken the Future Ready pledge, said Bob Jobin, program associate at NWP. This question can invite a conversation on how a school or district is preparing for what’s next.

“I think every educator is looking to empower their students as leaders and writers,” Jobin said. “If we can find a way to do this through the Future Ready initiative, and find a way to help districts enter into the conversation with Writing Project sites, that’s really the first step.”

The Power of Public Thinking: An Interview with Author Clive...

This post originally appeared on dmlcentral. Clive Thompson is a longtime contributing writer for the...

By Laura Hilliger, Mozilla Foundation Training and Curriculum Lead Mozilla’s Webmaker Training is all about...

October, also known as Connected Educator Month, has arrived. The great news is that there are...

DIY in the Classroom

By Megan Leppla, DIY Outreach Coordinator DIY is a tool for kids to learn new...